The Zealot is a Paladin build focusing on the rapid and hard hitting Zeal attack combined with the heavy armor protection provided by Holy Shield. Combining these two skills with various Auras, the Zealot can quickly switch between a brutally efficient and aggressive style and a heavily defensive survival mode as the situation calls for it.

The Zealot is the perfect combination of deadly damage potential and unbreakable protection. He relies on extremely rapid and deadly series of attacks provided by Zeal while retaining his unparalleled defensive capabilities. 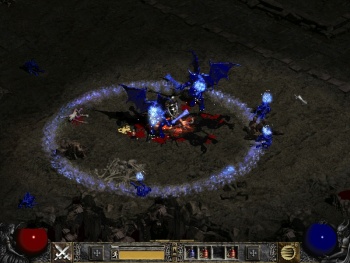 Thanks to Zeal and Fanaticism, the Paladin is able to strike several enemies in extremely rapid succession, dishing out punishment left and right, sending his enemies into recovery mode so quickly many of them don’t ever get the chance to retaliate. While in large groups of monsters, the skill allows the player to take them on all at once by spreading the attack between up to 5 monsters; on the other hand when dealing with a single enemy, Zeal rains down a quick succession of blows on single target, effectively allowing the Paladin to transition from crowd control into rapid killing mode while still using the same skill.

When surrounded by a number of enemies and having the need to focus down one single monster in particular, the Zealot can use Sacrifice to kill the target quickly albeit sacrificing his own health in the process. To recover after such an attack or after an especially gruesome battle, the Zealot can almost instantly heal and replenish his mana by redeeming nearby fallen monsters. When dealing with physically immune or tough monsters the Zealot has access to Vengeance for powerful elemental attacks or slowing down a faster enemy.

Unlike many other melee characters who have to employ distractions, disabling effects and rely on summoned allies to stay alive in combat, the Zealot is able to stand up to groups of monsters all by himself, protected by his shield and armor which no other character can equal.

In addition, the Zealot has access to several useful auras which can help him in many situations which other characters would be unable to deal with.

Because the Zealot relies on his ability to attack as quickly as possible, it is best to shape his attributes accordingly. The weapons which the character is most likely to use are swords, followed by the faster attacking maces or sceptres. Since 170 Strength is more than enough for you to carry any of these (Legendary Mallet is NOT a faster attacking mace) one then has to look to sort out the Dexterity requirements. With Dexterity around or above 120, the character will be able to equip every single one-handed sword, mace or sceptre in the game except for Phase Blade; however it is not worth it increasing your Dexterity by an extra 15 points because of it (though it attacks fast as hell). It is important to note that the Zealot does not need to increase his Dexterity to sufficiently boost his defence or chance to block since his skills take care of that for him.

As is usual, the remainder of the stat points is to be spent into Vitality, since even though your character will be defensively tougher than anybody else, every now and again a lucky hit will pass through your armor. You don’t want that hit to be the last one you ever take. Don’t waste points in Energy at all. Even though Zeal and Vengeance do burn through mana quite rapidly, all it takes is 2% mana steal and everything is fine. Not to mention, the character has his own ways of replenishing mana. 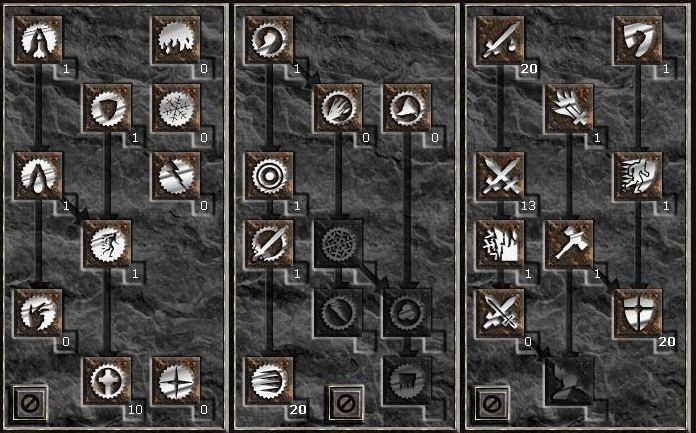 In the skill section, the character is relatively straightforward except for one detail. Zeal is not maxed out! Why I hear you ask. Simply said, the benefit from levelling the skill up isn’t worth it. Past level 4 the number of hits the skill provides doesn’t grow anymore, the only boost remaining being attack rating and damage. Though that sounds good enough, the fact is your attack rating will be already quite solid thanks to Fanaticism and the damage will only grow by 6% per level. With the synergy in Sacrifice the damage grows twice as much. Therefore once you gain access to Zeal, put 4 points into it and abandon it until you have all the other skills where they need to be.

Needless to say that will make Sacrifice one of your top priorities until you gain access to Fanaticism as it will be your best damage booster till that precious level 30. How much you actually use that skill itself is up to you. It is necessary to get a huge amount of life steal before it can be used for free (remember that life steal is reduced on higher difficulties) and therefore it always carries a bit of risk. However since the Paladin is very hard to hit, it is sometimes a good idea to sacrifice some health to deal with an annoying boss or a caster in the crowd. Against single enemies however, Zeal is always stronger simply because of the number of hits it lands so quickly. As a side note, I would like to mention the fact that Zeal has a slight bug. When a little distance away from your enemy, just close enough to get an attack in but not so close as to be directly touching, Zeal sometimes only attacks once. It is necessary to move in a little closer to get the full amount of hits on your opponent which in a middle of a battle can be a little annoying. However this only really becomes a problem when dealing with ranged enemies who hold their position and leave it up to you to come close. With melee opponents, they will usually close in by themselves so that you attack as you should unless they have extra long reach.

The moment you hit level 24 you should start dedicating some points (not necessarily all your points) into Holy Shield since this skill will be the difference between life and death for the rest of the game. Though it only visually enchants your shield, increases your shield’s damage, block rate, chance to block etc. it increases your OVERALL armor…not just the armor of your shield. Therefore, the higher armor your equipment has, the more powerful your Holy Shield will be. While with other classes it is best to prioritize resistances, extra health etc over superior armor, with the Zealot it is quite viable to throw away a bit of resistances, extra health etc for even as little as 50 or so extra armor since your Holy Shield can triple that bonus on the max level! However don’t throw yourself headfirst into a race for the highest armor rating possible…resistances, health etc are still important as many attacks cannot be blocked.

At level 30, the fun will begin since you gain access to Redemption and Fanaticism. Though Zeal in and of itself is a fast and powerful attack, it is nothing compared to what it becomes when using Fanaticism. As if the increase in attack rating, damage and party damage weren’t enough of an incentive to take this skill, the thing gives 35% increased attack speed at maximum level! Even with some of the slower weapons your Zealot will be able to attack faster than many characters can ever dream of with the fastest ones. However, though Fanaticism is powerful, you should not abandon your other skills. Sacrifice will still provide superior damage bonus and Holy Shield will still be your only hope for survival (and what well placed hope it is) so keep levelling these skills as well.

As for Redemption it is up to you really. You can level it up as you see fit, you can stop at level 5, you can go all the way to level 10; it is up to preference. At lower levels, the skill is best used after a battle when you don’t want to waste healing potions and have a little time to wait for the redemptions to start. If you want to be able to rely on the skill to heal you in the middle of a fight, when surrounded (that can happen to you a lot if you get overconfident in your defences), when fleeing, or simply when you want to prevent a caster from resurrecting fallen allies, then you should definitely get the skill to level 10. With redeem chance 71% and 70 health/mana points healed per corpse, you can go from 100 health and 0 mana to full health and mana within one second! In the middle of a fight and a lot of incoming fire from afar, even the best healing potions may not be able to heal you up to fighting condition. Level 10 Redemption can do that in a blink of an eye for free. However you definitely shouldn’t go any higher as the trigger percentage decreases past level 10 quite rapidly. So don’t waste your points, there are better things to use them on. 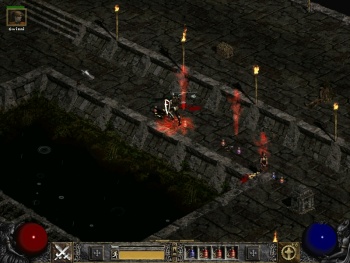 Finally I should mention a few one-of skills with this build. First off get yourself Vengeance as it will be your only elemental attack you get access to. It is just one extra skill point and it cannot be spent better, trust me. Second, don’t be an idiot and make use of skills you already have;-) The fact that it's not maxed out doesn't make it useless. Cleansing, Charge and Vigor are three extremely useful skills which…well ok Vigor not so much but Cleansing and Charge definitely. Cleansing helps you get rid of those pesky curses and get back into the fight quickly as well as shortens poison duration which is extremely useful when you are fighting dangerous poison oriented enemies like Spider Magus, Coldwordm the Burrower or Andariel. Charge allows you to quickly close in the distance between you and your next victim, as well as provides valuable knockback which can help you corner and disable an enemy who tries to get away. (It is also the perfect skill to you if you want to get stuck...sometimes using Charge can end with you running in one place or getting stuck upon reaching your destination so be careful. All you need to do is get your character sprite moving again and you will get unstuck...swap your weapon sets or unequip your helmet or whatever and you will be free to move again.) Vigor is more of a time saving skill…though it can help you escape from dangerous situations, mostly you will be using it when in town to move from vendor to vendor or when you die and need to travel from the waypoint to your corpse.

Though I did already mention a lot of things which fall into this section a small recap might not hurt.

1) High armor rating = good armor rating. Though carrying body armor with crappy armor rating and awesome resistances might be a good thing with some other characters, it is not with the Zealot; there are other things which can take care of your resistance problems (see point 3) so don’t waste an important body armor slot for this.

2) Fast attacking weapon is the key. Forget about using weapons with normal attack speed, god forbid less. Fast/Very Fast is the name of the game. And since you can’t really be fast enough…well ok you can but are unlikely to be when playing untwinked, get some nice gloves or other equipment which can increase your attack speed further.

Well, folks, that's all for this build. Hope you enjoy playing it;-)