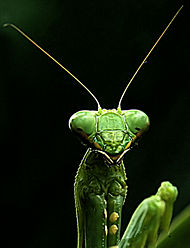 Xazax is described as a large praying mantis.

Xazax is a mantis-like demon featured in the novel Legacy of Blood who is apparently blood bound to the Witch Galeona.

He attempts a coup with General Augustus Malevolyn, who is in possession of Bartuc's helmet, in order to gain Malevolyn as a puppet in Bartuc's armor. Galeona is later killed by Norrec Vizharan, who is under the possession of Bartuc's armor, but Xazax remains on the mortal plain for reasons unknown. Xazax is also responsible for turning Malevolyn's mercenary army into demons in men's skin, which are later banished by Norrec. Later during the fight between Norrec and Malevolyn, Kara Nightshadow stabs Xazax in the back with her ivory dagger leaving a wound that would not heal, and also cast a spell upon Xazax the produces illusions of angels and demons he fears, forcing him to run in fear.

As he runs through the Desert trying to escape the illusions, he realizes one voice he hears is real, turning around he manages to utter "Diab-" before screams of terror are heard. This event sets the book just before the heroes in Diablo II arrive in Lut Gholein.

This article is a stub. You can help Diablo Wiki by expanding it.