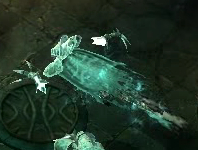 Wraiths return in Diablo III, and while their function looks about the same, their graphics have been substantially improved. Wraiths have a melee slashing attack and a ranged life drain attack. Characters under the life drain attack suffer a substantial penalty to their movement speed. They are very annoying monsters because they can disappear momentarily and never stand still resulting in attacks missing or constant running for melee characters.

They were seen emerging from Ghostly Orbs in the WWI 2008 movie and it was not known if they could only come from the odd monster generators, or if they could be found roaming freely in dungeons.