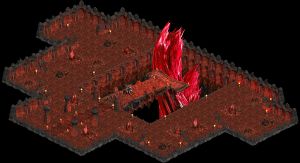 The Worldstone, also known as the Eye of Anu and the Heart of Creation, is a remnant from Anu's body and one of the most powerful artifacts in creation. A huge crystal-like artifact, it was the object both sides of the Eternal Conflict sought to control, and could be used to create worlds.[1] It was eventually stolen and hid by Inarius and his band of renegade Angels and Demons to become the center of Sanctuary, and placed at the heart of Mount Arreat. There it resided until the end of Diablo II: Lord of Destruction, when it was destroyed by Tyrael.

"As they drew closer, the crimson gleam -- and the slow but incessant breathing--grew even more pronounced. Whatever lay within the chamber glittered as bright as a sun."[2]

Before the Sin War

Originally the Worldstone was located in Pandemonium, where angels and demons soon found it and immediately began to wage war over it. Eventually, at a time when the High Heavens controlled the stone, Tyrael ordered a fortress built around it. This fortress was to become the Pandemonium Fortress, and over the course of the war it changed hands many times.[3]

The stone would eventually come to be stolen by Inarius, or rather hidden in a pocket dimension, causing the Eternal Conflict to grind to a halt.[4] Meanwhile, Inarius and his companions used the power of the Worldstone to hide their new dimension, and once hidden they created Sanctuary around it.

The original function of the Worldstone was to conceal the newly created world from the sight of both the High Heavens and the Burning Hells. However, numerous changes were made to it over the years after Sanctuary's creation.

The first change happened just as it was created when Inarius tied its awesome power to himself, thus preventing anyone else from using it.

After the betrayal of Lilith, Inarius could not bring himself to kill the nephalem. Yet he could not leave them to grow more powerful, and so Inarius altered the function of the Worldstone to not only conceal the existence of Sanctuary, but also to drain away the powers of the nephalem with each succeeding generation.

When Lilith later returned to Sanctuary, she used a spell to reverse the effect of the Worldstone on the inhabitants of Sanctuary, awakening the dormant power of the nephalem.

In the final battle between Inarius and Uldyssian, the human severs the link that connected Inarius to the Worldstone, thus ending Inarius' rule of Sanctuary.

At the end of the novel, a second pact between Mephisto and the Angiris Council is made regarding the Worldstone, but that arrangement was not witnessed by Rathma or any of the other mortals who were left to witness the first pact, and so, it is unknown what was agreed upon or if it changed the Worldstone in any way.

The Worldstone is also the source of the soulstones; presumably they're shards of it. When Izual is taken captive by the Prime Evils, many years after the events of the Sin War trilogy, he tells them about the Soulstones.

After the defeat of Baal in Diablo II: Lord of Destruction, Tyrael discovers that Baal had succeeded in corrupting the Worldstone completely, and that given the time, its energies will drain, allowing the powers of Hell to take root in Sanctuary. In order to prevent that from happening, and to ensure the survival of mankind, Tyrael destroys the Worldstone, which results in an explosion that eradicates the remainder of Baal's army and turns Mount Arreat into a crater.

Destruction of the Worldstone

The full effects of destroying the Worldstone have yet to be revealed, but it is likely that the explosion destroyed the physical forms of both Baal and Tyrael in the process.[5]

Even the characters in Diablo II aren't sure of what will happen now that it is destroyed, or even if it had to be destroyed in the first place. The Prophecy stated that the Worldstone would be corrupted, but apparently never actually said anything about having to be destroyed.

Taken from conversations of the inhabitants of Harrogath:

Caution: The following section contains content that has not been confirmed. At this point, it is pure speculation.

It is unknown what exact effect the destruction of the Worldstone will have on the inhabitants of Sanctuary. There are currently three very connected speculations regarding the power of the humans:

This may explain the very god-like powers of the classes in Diablo III as mentioned by Blizzard.