I have heard the most ridiculous tales about travelers being ambushed by vicious trees! It is too much. Despite their names, the wood wraiths are not plants but fully mobile beasts who have taken on the guise of foliage to ensnare their prey. Only a simpleton could be fooled by such a trick. 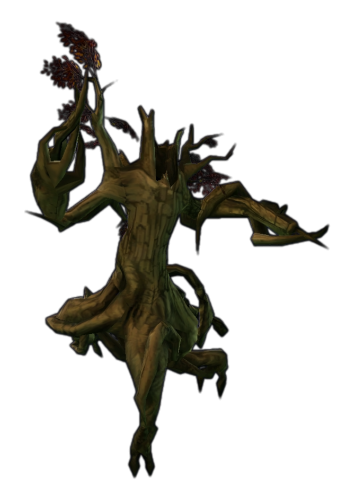 As beautiful as a walk through the Tristram wilderness is, with its lush fields and picturesque rivers, the air seems to take on an otherworldly foreboding as one approaches the fishing village of Wortham. My search to catalog the weird, the fabulous, and the all-too-often-dangerous inhabitants of our world had led me there. I hoped to find a guide who could bring me safely into the Festering Wood and back, for I had come to see for myself the strange creatures that are the "gnarled walkers".

What then, you may ask, is a gnarled walker? Is it simply an ensorcelled walking tree – a wood wraith – or is it something more? Does it truly live? These are the questions I sought to answer as I strode into the village of Wortham that bright day, which had somehow turned dark and dreary while my attention was elsewhere. But the few people I encountered in Wortham were a taciturn lot, unwilling to answer my inquiries.

As I inspected my way around the moribund town, it was impossible to ignore the fact that the bridge I hoped to take to the Festering Wood had been destroyed, burned beyond repair. My questions about this circumstance went unanswered. I likewise found it odd that there seemed to be only elderly people in the village, with the exception of one beautiful young woman whose father was quite insistent I keep my distance from her. Though he was rude on this point, I found him to be a rather sociable sort once convinced I was not interested in his daughter. He introduced himself as Pablo DeSoto, and as luck would have it, he was very knowledgeable about several topics in regards to magic and the object of my search.

According to Master DeSoto, the Festering Wood derives its name from the fact that everything in it seethes and roils with evil intent: even the ground itself has been known to rise up and devour a person. When pushed further in regards to the gnarled walkers specifically, he pontificated at length as to their true nature. He maintained they are vile mystical creatures from another realm who can only sustain their existence in our world by sapping life energy from men or animals. These heinous beings have shifted their appearance to that of trees, thereby luring their prey close so as to consume it whole and enrich their reserves of dark power. These beastly things move ponderously, and some are known to exude a foul stench that poisons their victims. Master DeSoto is certain the origin of the walkers, and of the Festering Wood itself, can be traced to the foul doings of necromancers, who he claims are responsible for much of the evil that has befallen our world. He expounded in full to me his theory that the "whole Diablo incident", as he called it, was tied up in their dark arts as well.

Regardless as to whether that is the truth of the matter or not, I felt fortunate that I was unable to find a guide to bring me into the Festering Wood. Upon hearing of what transpires there, I have decided it is far better suited to the adventuring temperament than my own.

This monsters type was originally known as "Gnarled Walker" but became Wood Wraith in the release version of the game.