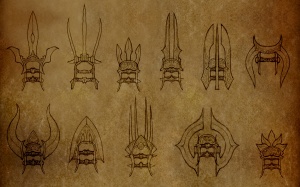 Weapons are essential to all characters and builds and come in a variety of forms. It has alsways been a staple in the Diablo series to allow all characters to equip almost all weapon types, and with the exception of a few class-specific weapons this remains true in Diablo III.

Choosing the right weapon is an important part of building a good character, as all spell and skill damage depend directly on weapon dps. Thus even Wizards who never plan on firing their wand or swinging their sword still need a weapon with good dps.

With the exception of the class specific weapons mentioned above, all classes can use all weapons. this was not always the case. In earlier stages of development, Blizzard planned to impose hard barriers on what weapons classes could use, stating that it didn't make sense for a wizard to ever swing a warhammer or for Barbarians to use wands. The stated reason was to limit the amount of animations they had to create for each character, but Blizzard have since then backed on this stance. There are still soft limitation as to what weapons characters will want to use, as Wizards are not likely to find useful properties on polearms, and barbarians are not likely to find properties that suit them on daggers.

The following are all the top-tier weapons available in the game.