Tristram's Cathedral is an ancient Horadrim edifice. Under it, they imprisoned Diablo in his soulstone. When the Horadrim faded away, the cathedral is left as decrepit ruin. When the Zakarum came to be the most practiced religion, the Cathedral became a place of worship and the seat of King Leoric, who converted Khanduras to the Zakarum religion.

From underneath the Cathedral, Diablo started corrupting the town of Tristram, the capital of Khanduras. 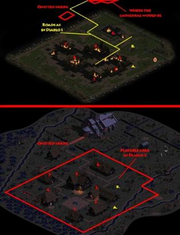 Tristram in Diablo 1 and 2.

The cathedral does not appear in Diablo II, as the portion of Tristram where the cathedral would be is not accessible (see image).

"After seeing the remains of Tristram for myself, I felt the need to search out further information on what it was about the corridors and dungeons underneath its old cathedral that held such mystique. Originally built as a Horadric monastery sometime around 912 (see my entries pertaining to ancient mystical traditions for more information on the secretive Horadric order), the building was later converted to a Zakarum cathedral. Legend has it that the original monastery was built over the vault where the mythical Diablo was imprisoned, and that his supposed release led to the horrors we all now associate with the name Tristram. In order to shed light on the many mysteries of the old cathedral, I sought out an old adventurer who had braved its ancient passageways, which were said to lead to the Hells themselves. "We'd all heard about the weird goings-on in Tristram, but we were drawn by the prospect of getting our hands on some of that loot we heard they were bringing up by the cartload". He paused thoughtfully for a moment and scratched the stub where his left arm had once been. "It ever strike you as strange that wherever monsters are stirring up trouble, that's where you'll find the most treasure? Why can't there ever be a big haul in a safe place?". Obviously he was attempting to ease his tension by making light of the whole event. "When we got to Tristram, we took our time before we got down to the business of actually going into the cathedral. Town had a nice inn, if I recollect. Truth is, there was something evil coming out of that old church: you could feel it. Now, me and my mates, we didn't want to admit we were scared, so after we ran out of excuses to avoid it, we made our way inside. And let me tell you, I never smelled death like I did in that place. Once inside, we were set upon by the undead," and he paused to see if I would laugh in disbelief at this. When I didn't, he continued, "That's right, undead. I've faced the undead several times, but you never get used to it. You think you're prepared, but there's just something that sticks in your gut, this horrible feeling. Your hands get slick with sweat, and your sword is hard to grasp correctly...you really doubt your sanity in being down there, facing something like that. And the stench is unimaginable. But we were pulling ourselves through – I had started to come out the other side, where you start to ease into that unsettled feeling and use it to drive yourself forward." It was at this point that his mood noticeably darkened. I found myself easing a bit closer so as not to miss a single detail. "Then it started to go wrong. We began encountering these, these dark ... things ... imps or demons ... or fallen, I think they're called. There were so many of them, all horns and flashes of red, attacking us from all sides. I don't think you could ever really be prepared for something like that. We got disoriented, which was easy to do. It was so dark .... And then we heard this ... this horrid voice that I can only describe as the sound of a saw ripping through bone. I can't even recollect what he was saying. I was so terrified I don't think I could understand it, but he kept repeating it, over and over." The adventurer shuddered at the remembrance. "He was this bloated thing ... and ... and there was blood, and bodies – everywhere I turned, some new horror confronted me. And suddenly he was on us; we couldn't shake him. Jeremy fell first, and then I ran. I admit it: I ran, left my fellows to die. I couldn't face that thing; it was all just too horrible. He hit me with a glancing blow as I fled, but even that was enough to take my arm almost clean off. I had to have a healer finish the job...." At this point he trailed off, lost in whatever regrets he has endured to this day." - Abd al-Hazir

The Tristram Cathedral twenty years after the defeat of Diablo.