Some devious little goblins have been robbing our merchants! When pursued, they simply open portals and disappear with a most aggravating chuckle. The peasantry seem to believe that the goblins serve a great demon lord known as Greed and furthermore, that their portals lead to Greed's domain! A ludicrous notion, truly.

Treasure Goblins are small impish little creatures that carry a bag of loot on their backs. They flee immediately upon sight of any player or on damage, leaving a trail of gold coins behind in an attempt to distract the player from killing them. Eventually they try and escape through a portal, but if players can manage to kill it before it gets away it will drop considerable loot. Loot quality is further increased by Nephalem Valor stacks with extra guaranteed Rare or better items dropping with a full stack.

Goblins are a universal spawn, spawning in most monster infested areas of the game. The variant that spawns is random and unrelated to the area. Some large areas such as Vault of the Assassin can spawn multiple but generally only 1 will spawn in a given area. There seems to be a correlation between variant and the loot dropped. The loot that drops when fleeing is mostly gold but can be other items. 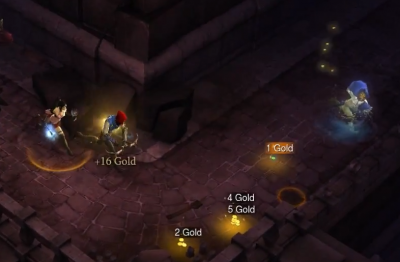 A Wizard and a Demon Hunter chasing a Treasure Goblin.