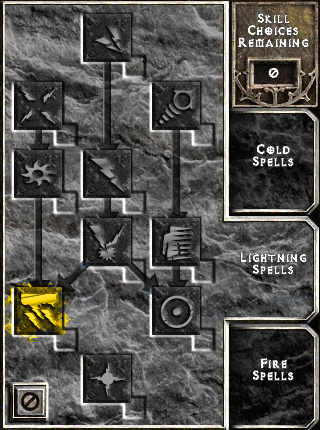 Thunder Storm is a skill which is somewhat debated in usefulness. When you cast it, it arms the Sorceress with an automatic tazer of sorts that expires when it's duration is up. It is somewhat akin to the Sorceress Hydra skill, except it only shoots one bolt at a time and is constantly with the Sorceress. While its damage is not extraordinary, it could be the weapon that trims that last bit of health off of your opponent when you don't have enough mana to cast another spell.

Weather manipulation is the most impressive form of elemental magic a Sorceress may attain. A Sorceress learned in this skill may manifest a tempest of dark storm clouds that follow her wherever she travels. All who approach the canopy of her storm are subject to the full force of the gale and bolts of powerful lightning![1]