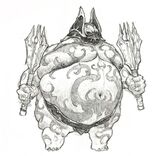 Concept Art of the Thousand Pounder

Thousand Pounder is a special boss monster, seen in the WWI 2008 gameplay movie and a few related screenshots of Diablo III. He is seen in the Old Cathedral beneath Old Tristram.

Thousand Pounder is summoned up in a scripted event. A circle of five Dark Cultists channels their energy to call up a demon. At first there are three pale-skinned youths dancing in the circle. They explode one by one, and then from their blood and flesh the demon is conjured. 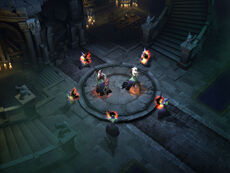 The Thousand Pounder moves slowly, but has tremendous power, and deals heavy damage with his two large maces. When he nears death, the hulking monstrosity rages into a frenzy. At this point the tattoos on the demon's skin begin to glow red and the monster begins to moves much more quickly. Upon defeat, the Thousand Pounder's death animation is basically the summoning animation in reverse; his skin sloughs off, then his muscles, before his bones clatter to the ground.