From Diablo Wiki
(Redirected from The Stranger)
Jump to: navigation, search

Archangel Tyrael The Former Aspect of Justice is a former archangel of the High Heavens, a member of the Angiris Council and the most prominent agent of Heaven that has appeared in the Diablo series. He is notorious for meddling with human affairs, and has on many occasions disobeyed the will of the rest of the Angiris Council for the benefit of humanity.

His domain in the High Heavens was the Courts of Justice, where angels come to air grievances and reclaim equilibrium[1] 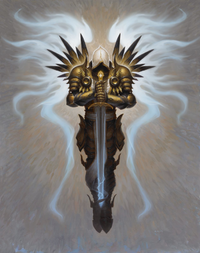 Archangel Tyrael, The Aspect of Justice.

Tyrael has not always been like this. During the Sin War when the High Heaven first discovered the existence of Sanctuary, Tyrael was of the firm belief that humanity was an abomination that had to be destroyed, and he stopped at nothing to thwart the forces of Hell from gaining any form of advantage through humanity. In the Veiled Prophet, Tyrael uses Achilios as an assassin to kill Uldyssian and Serenthia, and lures the humans on numerous occasions into thinking he's on their side when his true aim was always to throw them into as much disarray as possible before the Heavenly Host would arrive to destroy them all.

However, through pure strength of will, Achilios misses his shots and his targets live. Tyrael claims that Achilios' ability to resist his commands could "change everything". Despite this, Tyrael continued manipulating the forces of Sanctuary and even tricked Achilios and Serenthia into attacking Uldyssian by showing them a false vision of Malic possessing Uldyssian's body. This plot also fails however, and after Uldyssian defeated Inarius and cast out both demons and angels from his world, the Angiris Council convened and cast a vote to decide the future of Sanctuary. It is at this point that Tyrael finally has a change of heart about the so-called "abominations" and their world of Sanctuary:

...THIS THING GREW... AND GREW... UNTIL IT BECAME WHAT NONE COULD FATHOM, WHAT NONE COULD HAVE EXPECTED! THIS PLACE CALLED SANCTUARY HAS BROUGHT FORTH SUCH AS WE HAVE NEVER WITNESSED, THINGS I MYSELF CALLED ABOMINATIONS! Before Imperius could interrupt, Tyrael pressed, BUT ABOMINATIONS DO NOT FEEL SUFFERING, THEY DO NOT STRUGGLE FOR ONE ANOTHER AGAINST GREAT ODDS AND THEY DO NOT... THEY DO NOT... OF THEIR OWN FREE WILL... CHOOSE... YES... CHOOSE TO COMMIT SUCH GREAT SACRIFICE FOR THE SAKE OF OTHERS...
...I DID CALL THEM ABOMINATIONS... AND I WAS WRONG! MY VOTE IS FOR THEM... FOR I WOULD SEE WHAT THEY MIGHT BECOME... AND MARVEL IN IT.[2]

Tyrael, after working so long against the beings of Sanctuary, realized the potential in them and sided with two other Angiris members, Auriel and Itherael, thus allowing Sanctuary to continue its existence.

Following the end of the Sin War, Tyrael regularly helps mankind where he can. During the Dark Exile it is he who creates the Horadrim order and gives the Horadrim the three Soulstones with which they capture the Prime Evils. At that time there was a non-interference pact between Heaven and Hell whereby no side was to interfere in the events of mankind, but contrary to the wish of the Angiris Council Tyrael still aided the humans in the capture of the Three.

When Diablo later escapes his imprisonment at the end of Diablo I and begins to make his way to the east, Tyrael tries to stop him from freeing Baal in Tal Rasha's Tomb. While the two battle Baal is freed by Marius, a follower of Diablo, and the two Prime Evils overpower Tyrael and trap him in the chamber. He is later freed by the heroes of Diablo II.[3]

He later makes an appearance in the Pandemonium Fortress, where he instructs Diablo's pursuers to find and kill Izual, after which he also tasks them with slaying Diablo in the Chaos Sanctuary. He also reveals to have sworn an oath watch over the Horadrim, and since Deckard Cain is at the time the last living of their order he states that he will watch over the old man.

He makes his final known appearance at the end of Diablo II: Lord of Destruction where he destroys the Worldstone after Baal has corrupted it.[4]

You cannot judge me. I am Justice itself! We were made for more than this! To protect the innocent! But if our precious laws bind you all to inaction... then I will no longer stand as your brother.

By 1285, once again, evil threatened Sanctuary, this time from the Lesser Evils Belial and Azmodan. He promised that Man would not face the coming darkness alone. Imperius however, had since discovered his transgressions, and was unmoved by Tyrael's defiance. The two came to blows before Tyrael declared that if Heaven would not intervene on Man's behalf, he'd do so himself. He became mortal by tearing off his wings, and fell to Sanctuary as the Falling Star, smashing into the Tristram Cathedral. The journey left him weakened, but thanks to a group of Heroes, he was saved, and Belial's followers were defeated. However, his old friend, Deckard Cain, was killed in battle by Maghda. His adopted daughter, Leah, and Tyrael carried out Deckard's funeral before heading east, to Caldeum.

Caldeum was suffering from Belial's machinations, but there was a hope in the darkness. Adria, Leah's estranged mother, joined the Heroes, presenting the Black Soulstone, capable of capturing all the Lords of Hell within it. Thanks to the Heroes, Caldeum revolted against Belial and the Lord of Lies himself was imprisoned within the soulstone. All that was left was Azmodan. And thanks to a vision Leah had, Tyrael and the others learnt that his forces were amassing at the Arreat Crater. The group headed for Bastion's Keep, where the forces of Sanctuary and Hell met in battle. After a titanic struggle, the Heroes came to confront Azmodan himself, capturing his essence in the Black Soulstone. Victory seemed assured, though Adria pointed out the stone would have to be destroyed under specific circumstances.

Adria, however, had been in league with Diablo since he awakened in Tristram, and turned the artifact on Leah. To the group's horror, it was revealed that Diablo (as the Dark Wanderer) had bred her as a vessel. A vessel that would contain the essences of the Seven Great Evils, all so neatly packaged within the Black Soulstone. Diablo now stood as the Prime Evil, and departed for the High Heavens. Tyrael and the others followed him.

Diablo and his forces rampaged through the High Heavens and Tyrael gave into despair. However, his human companions refused to give up, and turned the tide of the invasion, even casting down Diablo himself. In the aftermath, Tyrael decided to rejoin the Angiris Council, but as a mortal. He would now be the aspect of Wisdom, and vowed that forevermore would Heaven and Sanctuary stand together.

Tyrael appeared as a man dressed in golden robes and armor. His "face" was constantly shrouded in black, and his wings were shaped like white glowing tentacles, always gently swaying in the air. Tyrael also carries a sword with him, but lacks other personal objects.

As of Diablo III, he is no longer an angel, but rather a mortal. He is a bald, dark skinned person with robes reminiscent of his former high station. Tyrael is still shown as being muscular, wielding El'druin by his side.

Tyrael is a member of the Angiris Council, representing Justice, the ruling body of the angels. As such, he has no direct superior and there is no mention of a god or gods above him. Nevertheless, Tyrael has disagreed with the will of the Council on several occasions, often by helping out the human forces struggling against the forces of Hell, and as such, been disobedient to the consensus of the Council.

The Sword of Justice is Tyrael's weapon and capable of cutting anything and anyone, except perhaps the righteous which it cannot harm.[5]

El'druin was the sword used by Tyrael when he destroyed the Worldstone in the aftermath of Diablo II: Lord of Destruction,[6] but unlike Tyrael himself the sword survived and plays a central role in the Sword of Justice comic.

Heroes of the Storm