Please take a moment to fill out this survey on your gaming habits!

Tales of Sanctuary is a comic book released on November 9th, 2001, it features three stories set in the world of the Sanctuary. The first story, Rage, is about Azgar the Druid in his struggle against Baal's minions. The second one, the Hand of Naz, tells the tale of a Barbarian, Renit the Dark Stalker, who allies with the Necromancer, Cairo, to find the artifact known as Hand of Naz. And last is Hatred's Bride, the story of Hale, a Paladin who saves a girl, Bay, from demons and seeks to protect her. 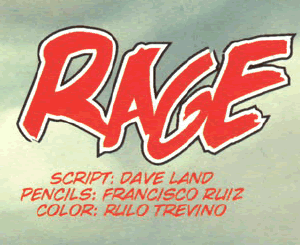 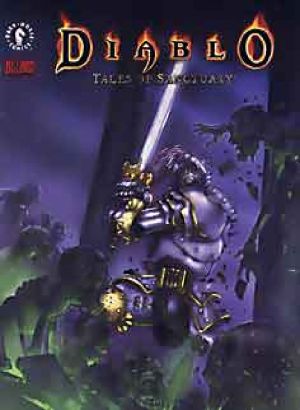 A boy runs towards a fire-lit cave on a snowy mountain, calling out for a druid. He enters the cave to find a bitter druid by the name of Azgar sitting by the fire. The boy tells the druid the Baal's Minions of Destruction are readying for an attack on his village, the village that was once the druids home. Azgar tells the boys that he can never go back, because he hurt the one who looked up to him the most. He tells him that as a boy, during his training with his father, his brother, Grey, was his biggest admirer. Azgar's training included keeping the village safe and studies of the spiritual, during which, he noticed "certain fabled abilities", he had the gift of the "spiritbeast". He continued his meditation until, one day, he transformed into a werebear. The young Azgar never before knew such rage and, scared, ran for the place he felt safe, home. Unfortunately, Grey was at home, and Azgar, being fully possessed by the beast, swiped him with his paw. When Azgar realized what happened he came back to normal. Fearing the worst, he fled into the forest and hid. A search party was formed, but they couldn't find the young druid. Not even when he found out that his brother was alive, only blinded by the hit, did Azgar consider going back for fear of hurting people.

He became the defender of the forest that was now his home. The boy says that the druids story differs from what he has heard and that as the clan's warrior's are on an offensive, the village's defenses are thin. Hearing this, Azgar decides that his self-imposed exile must end. The druid intervenes just in time to save the villagers. Just as he is about to dispatch the last monsters, Azgar is impaled on a Minion's spike. Mortally wounded, he collapses. As he lay dying, Grey approached and said that he never held his brother responsible for what happened that day, that he knew it was all an accident and that the men who search for him the day he fled just wanted to take him back home. To Grey, Azgar will always remain his brother and his hero. Azgar dies, but his name will always be honored for saving the village.

In the land of Daken-Shar, a war rages on between the demon army (Ahjad-Den in Barbarian language) led by Baal and the Children of Bul'Kathos. Only one Barbarian survives to this day, Renit. He has made a promise: the demon army shall never win the war. One day, he hears a scream coming from the ruins of a tower. Inside, he sees a women beset upon by Giant Spiders. He kills the creatures in just a few swings of his axe. As a token of her gratitude, the woman tries to heal Renit, but he says the creatures were no match for him, and that he hunts for the demons that slayed his comrades. The woman, who presents herself as Cairo, an apprentice Necromancer, whose master was also killed by the Demon Army, says that she can help the Barbarian on his quest. She tells him of a ancient artifact of great power, The Hand of Naz. With it, Renit can raise a spectral army with which he can reach his goal, destroying the Demon Army. Renit agrees, seeing that vengeance is in his grasp.

They soon reach the Castle of Kanemith. The artifact they search for is hidden in a secret tomb beneath the castle. The two reach a sarcophagus inside of which a dead king wears the gauntlet. Upon removing the Hand of Naz from the tomb, the tomb shakes and Cairo says that their trespass has activated a curse. A wave of undead rise and attack. The Barbarian leaves Cairo behind to be killed by the monsters.

Wearing the gauntlet, Renit faces the Demon Army. He's not alone, the spirits of many warriors stand besides him. On his orders the spirits attack, tearing apart the demons. As the battle finishes, the spirit of the king from whom the gauntlet was taken comes towards Renit and kills him. Renit's spirit rises to join those previously enslaved by the Hand of Naz.

But the Barbarian awakens to see Cairo standing over him. She had resurrected him. The Necromancer lied when she said she was just an apprentice, she is a master, part of the Bright Circle, but she had not lied about her people being slain by demons. This happened when she was just a girl, not recently as she led Renit to believe. Cairo said that she trained for years to exact her revenge. When she learned about the ancient gauntlet she knew that this was her chance. The search led her to Daken-Shar, where she found Renit's people besieged by the demons. She knew that the Hand of Naz could only be worn once, but she didn't know why, so she decided to use Renit as a test subject. She lured him faking distress and took him to the location of the artifact. She had known of the undead guards of the tomb and that the Barbarian would leave her to die to pursue his own goals, but the undead were not a threat to Cairo. She left Renit to accomplish their common goal and for that she brought him back to the land of the living.

Now that the Necromantress knows what is the price of wearing the gauntlet, she takes her sword, and with its hilt breaks the jewel encrusted into the artifact. This releases all the souls trapped in the gauntlet, but gives her all the knowledge of all those that had ever worn the Hand of Naz. Cairo leaves saying that her and Renit will never meet again.

Title and names of artists

A Paladin of the Zakarum, Hale, is fighting a Blunderbore, the fight ends quickly with the monster split in two. But there is no rest for the warrior of Light as he hears a scream. He sees a burning house and a peasant, surrounded by goatmen, trying to protect his daughter, his wife being already dead. The peasant is no match for the monsters and they turn towards his daughter. They don't have the chance to touch the young girl as Hale intervenes and kills them. The young girl, Bay, tells him that the goatmen never seemed to notice them before, as they hid, but this time they attacked. The story is not new to Hale as he has heard of random attacks on farmers before. Burying the parents, they set of towards the Zakarum Cathedral to turn Bay over to them to raise her as the Priests of Zakarum did him. Bay tells Hale that her dad wasn't a believer and that he and the priests had an argument and that he refused their protection.

Reaching the giant wooden castle-like cathedral, they are taken inside. The Paladin tells them that he is here for rest and to drop off Bay, to be raised at the cathedral. The girl is taken by one of the priests and Hale is shown to his room. His suspicions grow as he senses that something is amiss. They are confirmed as, in the middle of the night, he hears Bay scream his name. The door is locked, but that is only a slight delay as he bashes through it. Following the cries for help he reaches the cathedral's crypt. Undead attack him, but he dispatches them swiftly. Hale reaches the place where the priests have prepared to sacrifice the girl to Mephisto. The Paladin battles through the Zakarumites, his beliefs shattered by his discovery. As he is swarmed by the rest of the priests, the Curate escapes through a portal with Hale. Killing all the followers of Zakarum, Hale questions the meaning of his life. Was it spent in lie, in the service of evil, of Mephisto? No. His purpose is still clear, he will fight evil and fight to find out the truth. The cathedral "is a place of evil -- and for that it must burn" and "if the Zakarum faith is truly a work of evil... then it shall burn as well."