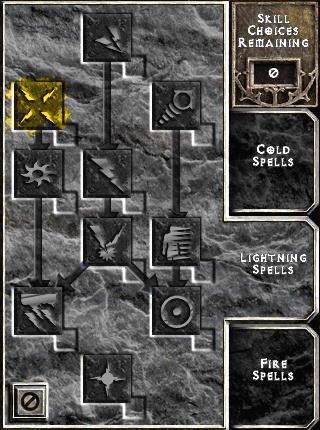 Static Field is the most powerful skill in the game- relatively. However, it also can never kill a single enemy. An odd paradox, but it makes sense when you think about it. Say a monster has 10 health- if you cast Static Field, that monster will now have 7.5 health. Now think about a boss having 1,000,000 health. In a single cast, you reduce the boss' health to 750,000- that's 250,000 damage by a single skill use! However, the skill only ever takes away 25%, so eventually it can no longer do sufficient damage to be viable for killing monsters. It's best used to substantially weaken a boss down to below half health, and then to continue pummeling the boss with your other skills.

A devastating spell of limited range, Static Field instantly removes a good portion of health of nearby enemies. Thus injured, enemies are easy prey to the attacks of the Sorceress or members of her party. Subsequent castings do less damage, but in combination with other spells or a decisive melee attack, a Sorceress can rely on this powerful ability to quickly dispatch even the strongest of foes.[1]