From Diablo Wiki
Jump to: navigation, search
This Diablo III NPC article is a stub. You can help Diablo Wiki by expanding it.

The Siegebreaker Assault Beast was the first large boss monster revealed by Blizzard in Diablo III. After following the player through the Tristram Cathedral, the beast finally confronts the heroes and engages them. With massive metal fixings on the monster's arms, the Siegebreaker makes quick work of those closest to him. Upon the near death of a playable character, the Siegebreaker grabs that player's character and bites the body in two, and is also shown spiking the male witch doctor to the ground, killing him. These were some of Diablo III's special death animations - they have been removed during development however. 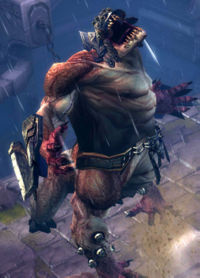 The Siegebreaker roars at his foes
Retrieved from "https://diablo.gamepedia.com/index.php?title=Siegebreaker_Assault_Beast&oldid=153713"
Categories: