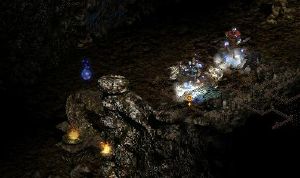 A Shrine and its mini map icon

Shrines are environmental objects found scattered throughout the Diablo II universe. They can be recognized on the mini map as a golden, circled cross. Clicking on a Shrine will activate its particular effect. There are many different types of Shrines and most are considered to be beneficial. Once a Shrine has been activated, the player will be unable to benefit from its effects again until it has recharged. Most Shrines have a modest recharge time, although some Shrines will not recharge and can only be used once per game. Shrines can have a significant impact on the power of your character - use them well!