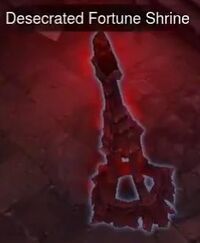 Shrines are powerup locations that provide the player with a short bonus whether it be a temporary buff, item, or favorable change to their surroundings.[1] Upon player interaction, the shrines bestows its bonus to the player with the message "Blessing Received". Unlike in Diablo II, effects from different shrines can stack. In co-op, they will provide bonuses to all players near enough to the Shrine when it's activated.

°The bonus from this shrine also applies to the EXP bonuses from gear, effectively increasing the bonuses' actual values.

Wells in Diablo III will spawn anywhere a Shrine can, but also have the ability to refill.