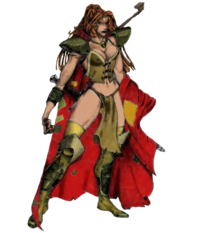 Scouts are the best archers, whose arrows are fast, precise and deadly. They are vulnerable in close quarters and cannot even approach Paladin defense level, and melee weapons in their hands are practically useless. Their magic potential is higher than that of Paladins and they successfully learn spells that heal, increase defense, stop enemy at the distance and enrage them.

Scouts shoot multiple arrows when under fury and knockbacking weapons make them a good ranged fighters. They are not supposed to be approached and always try to kill everything before it reaches them (for when it does reach them, Scouts usually die) and protection from ranged attacks is more important for them than protection from melee attacks.

It is vitally important for Scouts to plan the battle ahead and follow their tactical pattern, because even one simple mistake can instantly lead to their death. They have enhanced senses which allow them to foresee dangers and prepare for battle before it's too late.

Stats to focus on, in order of importance: DEX, STR, MAG, VIT