From Diablo Wiki
(Redirected from Realm of Pain)
Jump to: navigation, search

The Burning Hells is the residence of the demons and demonic overlords- Diablo, Baal, and Mephisto. It is from here they launch their attacks on the mortal and heavenly realm.

It is unclear what the Burning Hells actually encompass. Sanctuary is evidently a single planet, but whether Hell is also a planet, several planets under one umbrella term or an entirely different form of plane is unknown. Depictions of Hell generally feature dead steppes and molten rivers of lava, but whether that's an accurate description of all of Hell is also unclear.

The Burning Hells are divided into several regions, each under the control of one of the Great Evils. These realms reflect the aspects of their demonic masters and exemplify their traits.

The Realm of Anguish is a nebulous realm with very little information available about it, it certainly reflects its mistress: Andariel and her constant desire to inflict psychological pain on her victims. Those who have been in her clutches for too long are said to willingly give themselves over to Duriel and his realm of Pain.

The realm of Baal is a place of neverending creation and subsequent destruction. Demons are bred here for no other purpose than to be destroyed by their master, and magnificent strongholds are likewise erected and pulverized over and over.[1]

This domain also harbors the Hellforge, which players visited during the events of Diablo II. One of the items present there is the Anvil of Annihilation, which was used to smash the soulstones of Mephisto and Diablo.[2]

Unlike many other realms of Hell, Mephisto's domain is one of the most heavily populated and has, by some, been described as the capital of the Burning Hells. The demons who live here are pawns under the watchful eye of Mephisto, constantly scheming with and against each other, always vying for dominance over the other factions. Alliances form and shatter, often ending in violence.[3]

The Realm of Lies is true to it's namesake, a warped domain that twists all reason and logic on its head. What appears as a tasty fruit may be rotten to the core, hallways suddenly stop or lead to bottomless pits, and what appears a hellish pit of flames may be a tranquil garden. Escape is nigh impossible, and its master revels in his victim's helplessness.[4]

The Prince of Pain inhabits an area befitting his name, as it is best described as a massive, sprawling torture chamber. Countless insidious machines designed to cause the most horrid forms of pain are scattered throughout the realm, and thousands of demons are trapped in them. Like Diablo's realm, few demons dare enter this part of Hell.[5]

Azmodan's realm is, perhaps understandably, the most densely populated of all the realms. Here demons are indulged in all the pleasures of life, until one's mind can no longer take it and is lost to madness. The Realm of Sin is also one of the few Realms, along with Belial's, that at first appears deceptively seductive and pleasant.[6]

Diablo's region is the least populated of all the regions of Hell and can best be described as a living nightmare. The place is thus desolate, as very few demons can stand the constant state of fear and darkness they're exposed to while there.[7] 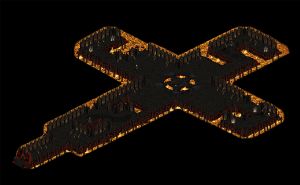 In Diablo II the player enters the Burning Hells to slay Diablo. The game portays a number of dead and desolate areas with tortured souls, rivers of fire, destroyed buildings and fiending demons as well as undead everywhere. These places are

At the edge of the Outer Steppes lie the Pandemonium Fortress, the last bastion of Heaven before the realm of Hell.

In Diablo I, the player journeys into Hell to slay the demon Diablo, but the method of transportation is simply a staircase down into the earth. This portrayal of Hell as located in the same physical realm as Sanctuary itself is markedly different from the one appearing in Diablo II and later the books, where Hell is an entirely different world. This is because this Hell is created from the warped and tortured mind of Prince Albrecht.