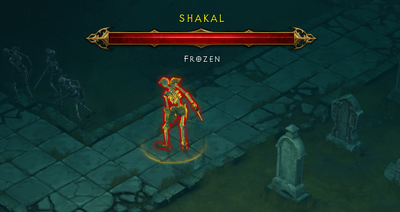 Rare Monsters have yellow names and display their abilities.

Rare Monsters, known as Unique Monsters in Diablo II, are more powerful versions of regular monsters. They spawn with additional abilities that can make it harder to defeat them - to assist with the added challenge, they also drop larger Health Globes. Not all areas can spawn Rare Monsters, but when possible they can only be of the same type as the regular monsters for that area. For example, rare Carrion Bats cannot spawn in the Cemetery of the Forsaken because only Skeletons can spawn there. Rare Monsters will always spawn with minions that also share the same ability as their leader. Only the leader of the pack will drop the higher quality loot.

At least one of the following abilities will always appear on Rare Monsters:

Names are generated for Rare Monsters and can sometimes be based on their abilities: