From Diablo Wiki
(Redirected from Pazuzu)
Jump to: navigation, search

To those who doubt my achievements in research, I present my findings on the dune dervish. It took me many years to find the truth of these strange, deadly figures, but my sources indicate that they are the cursed remains of mages who summoned a demon far beyond their power to control.

The Dune Dervish family are massive monsters that attack by periodically spinning in a Whirlwind like manner. Their attack inflicts continuous heavy damage to players at melee range and elite packs can make short work of even the toughest players if care is not taken. When spinning they will also reflect all player projectiles that hit them turning ranged fire against the player. When using a ranged character, care must be taken as a few reflected projectiles landing critical hits can kill party members.

Shown in the Diablo III Monk gameplay trailer and encountered in the BlizzCon 2009 demo, the Dune Dervish is a nasty creature that resides in the deserts of Act II. The Dune Dervish's trademark move is a whirling move that does great damage, knocks the player back and reflects most types of projectiles.

Additional note* The Dune Dervish's spinning attack is responsible for the development team to go back and redo the looks of the Barbarian' Whirlwind attack. 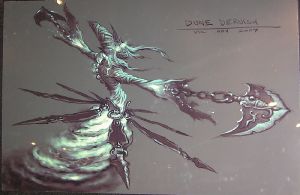 Concept art of the Dune Dervish