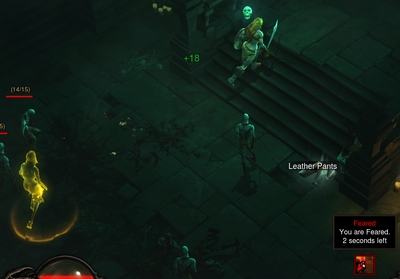 A rare Wretched Mother with Nightmarish

Nightmarish is a monster trait that is unique to Diablo III and was first introduced in Beta Patch 14.

Nightmarish monsters have a chance to fear the player on hit and can be triggered from both melee and ranged attacks. The "Feared" debuff lasts for 3 seconds during which the player runs uncontrollably away from the monster. A skull icon appears above the player's head indicating the applied debuff.

This trait can occur for any monster.[1]

Monsters can also be affected by the nightmarish ability if they take friendly fire, such as is the case with an exploding Grotesque.