The Minion Necro is a necromancer build that utilizes, primarily, the skeleton, skeleton mage, golem, and revive abilities. After reaching a high level it is quite easy to summon an entire army and have them slaughter demons for you.

Necromancers are slow. Yeah, that was what I thought before I started building them like this. I was wrong, so are you. --Gaby de wilde

For the most part this is a PvE build, but can be fun to PvP. Just make sure you teleport away if you think you're in danger of dying. If you die all your minions die with you, and it can be a pain to raise another army.

Warning: This build is meant for more advanced players. It utilizes items that are very difficult to find in the world. Therefore, having items of value to trade and being a good trader is very necessary.

Update: I just went on D2 and made this build. IMO it is extremely slow at killing monsters (compared to bilzz sorc, hammerdin, etc.) After summoning an army there isn't much to do other than cast amp damage, and the occasional corpse explosion which doesn't give the player a very active role in slaying monsters. That said, I do have friends who extremely enjoy this build so I still encourage people to try it.

This build is the strongest Minion Necro build there is. Your necro will have max resists, a decent block rate, and lots of pets. Assuming you use your mercenary, you and your army will constantly be effected by:

Not impressed? Did I mention you can teleport? When teleporting, all minions are teleported to the exact spot that you click. This indirectly allows you to force your minions to focus fire.

In addition, you can turn into a bear at will. (not practical, but fun) :D

This character is based mostly around his minions. That means you, the player, are not to be running in monsters faces and taking hits all the time. Think of your pets as your "tanks".

Depressing as it may be, armies do not follow you from one game to the next. Therefore, after entering a new game your first goal should be to begin building your army. Go to an area of your liking and begin killing stuff with your spells, your mercenary and your golem. Use Revive, Raise Skeleton, and Raise Skeleton Mage on every single body that dies until your army is at its maximum force. Now you are set. Teleport wherever you like and begin killing things. Casting amplify damage debuffs enemies and forces them to take sufficiently more damage, making your army much more effective. If your army is at its maximum capacity and there are bodies of demons on the ground, use corpse explosion on them. Corpse explosion does excellent damage and is 50% physical damage so having the curse Amplify Damage on your enemies buffs that spell as well. As your monsters take damage, some of them may die. Remedy the situation by resurrecting more out of the bodies on the ground.

While there is no way to control your minions, using the teleport skill you acquire from Enigma, you can teleport yourself and all your minions onto a single target. This is your best form of "focus fire".

Make sure to finish these quests, allowing for increased stats, skills, and resists:

If you have an Annihilus and Torch, you shouldn't even need to put any points into strength to get to the point that you can wear your Breast Plate Enigma. Equipping your Enigma will add a large amount of strength, satisfying other items' strength requirements, etc. If, after Chain Equipping, you still have not satisfied the stat requirements of all your items, allocate points into the proper stat so you can equip your items.

Next, if you think you will be pvp'ing you may want a decent block value to block from melee and ranged attacks. Put points into dexterity until you are satisfied with your blockrate. (As you level up, your blockrate will decrease.)

Done with your strength and dexterity requirements? Dump all the rest of your points into Vitality (Shift + Left Click) 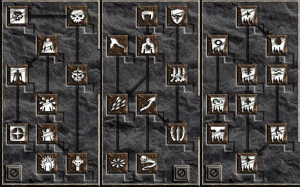 Your skills should be allocated so that you have the maximum amount of minions. I found by level 82, I could max Raise Skeleton, Skeleton Mage, Skeleton Mastery, Revive (remember these are your priorities, as well as 1 in amplify damage) as well as 1 point in the entire summoning tree. Even then I had over 30 skills unused so I put points in corpse explosion (very good damage) and many skills in the Poison and Bone tree for fun.

You can access my preferred build by clicking on the link underneath the Necromancer skill tree to the right. (My build considers additional skills from gear, Annihilus, and Hellfire Torch, but does not include any regular Skill Charms.)

With this gear build, you will have +11 all skills, and +15 to curses not counting any additional +skills from an Annihilus, Torch, or skill charms.

This section is set up as follows: Item farthest left is your optimal item for that slot in your character. Any items to the right may be a second choice, or a magic find opt-in.

Putting this in a breast plate allows for a very low strength requirement. As Enigma gives almost 70 strength at higher levels, it allows you to satisfy strength requirements of other items without even putting points into strength. This way you can save the majority of your stat points for Vitality.

With regards to MF, Goldwrap is the best belt in the game of Diablo II. I still prefer Tal Rasha's belt to it though because Goldwrap only has room for 3 rows of potions.

While many might consider the Beast runeword more of a melee class item, the runeword is incredibly powerful on a minion necromancer. The axe offers fanatacism to all your minions, increasing their damage output substantially. Compared to the next best weapon (arguably the Heart of the Oak), Beast becomes an obvious choice, as one realizes Fanatacism far outweighs the gains of +3 skills, resists, and some faster cast rate.

Call to Arms weapon and Spirit shield, both with low requirements are very useful on your alternate weapon/shield. Battle Orders is incredibly useful even on characters that are soloing. With a minion necro, battle orders can be cast on your entire army, making it that much more useful.

Note: All mercenary items should be ethereal, as items do not take durability damage on mercenaries. This way their armor gives much more defense, and their weapons do much more damage.

The Meditation Aura granted by Insight increases your mana regenaration rate by an enormous rate, which allows you to cast and teleport over long distances without spamming mana potions.

If you feel your mana regeneration is sufficient for the way you play, I suggest you find a weapon that offers a large % chance of Crushing Blow. A crushing blow acts in the same way as the spell Static Field, taking off a large portion of the enemies health, which can be extremely helpful against bosses.