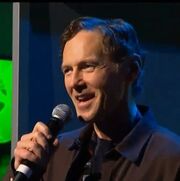 Michael Gough is a singer and voice actor best known among the Diablo community as the voice behind Deckard Cain.[1] Gough's first appearance in a video game was in 1993 as the Announcer in Ridge Racer. Since then he has built an extensive portfolio that includes some work in more recent popular titles such as: Gears of War (1 and 2), Call of Duty 4: Modern Warfare, Aion, Dragon Age: Origins, Assassin's Creed II, and Final Fantasy (XIII and XIV).[2]