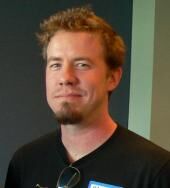 Micah Whipple - commonly known as Bashiok on the official Blizzard forums - is the Diablo III Community Manager of Blizzard Entertainment. Many fans will recognize Bashiok by his Fallen Shaman avatar.

Bashiok's avatar on the official forums

Bashiok was previously known as Drysc in the World of Warcraft community when he was employed as a Community Manager for the US World of Warcraft forums. He is also known to manage Diablo's official Twitter feed and Facebook page.