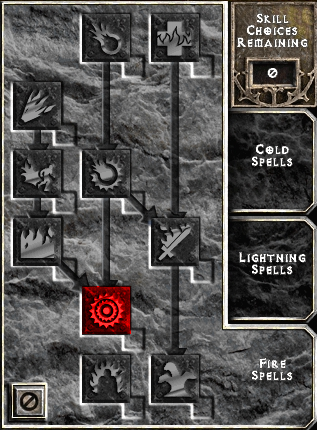 Meteor is the special kind of skill you reserve for herding monsters and slamming bosses. When invoked, it initiates with a modest ring of fire which does no damage, but acts as a count-down to the fall of your meteor from the sky. Upon impact, Meteor explodes, affecting a large area with fire damage, as well as leaving several persistent flames which do additional damage until their duration runs out. With its large amount of synergies, potentially high amount of damage, and the ability to stack three or so meteor explosions on top of each other, this is a very powerful skill.

Reaching out to the heavens, the Sorceress calls down a falling star to strike her adversaries. This is one of the strongest of her spells, capable of reducing large areas to cinders. During the Vactayan uprising, a Sorceress by the name of Hepsheeba took pity on the plight of the revolutionaries and joined their cause. During the final battle of the conflict, she cast this spell to great effect, single-handedly destroying all of Lord Bareen's troops and delivering the Vactayans from his tyranny.[1]