This article is about the character Lilith. Were you looking for Lilith (Diablo II)?

Lilith is the daughter of Mephisto and Auriel, sister of Lucion, and one of the primary antagonists in the Sin War trilogy. Together with Inarius she led the angel and demon rebels who stole the Worldstone and with it created Sanctuary.

Lilith was one of the demons that Inarius came into contact with when he had become discontent with the Eternal Conflict and was looking for a way to end it. Together the two found many other angels and demons who shared their disdain for the war before finally stealing the Worldstone and hiding it from the vision of both the High Heavens and the Burning Hells. With the Worldstone in their possession, they set about creating a world which they named Sanctuary.

Inarius and Lilith fell in love with each other, as did many other angels and demons, and from these unions were the nephalem, the first generations of humans, born. The nephalem possess great innate powers, enough to one day rival and surpass the powers of both angels and demons. Lilith saw their potential and realized that properly led they could be used to overthrow both Heaven and Hell and bring an end to their endless struggle. Inarius however feared their strength and wanted to kill them all.

At the time Inarius, having bound himself to the Worldstone, was far stronger than Lilith or any of the other rebels on Sanctuary. Realizing she could not forcibly stop him from killing the nephalem, she instead killed all the other angel and demon rebels on Sanctuary. She hoped this would force Inarius to spare them, as the alternative would be to spend eternity by himself. Her prediction turned out to be true, but to maintain power over all Inarius modified the Worldstone to continually dampen the power of the nephalem with each new generation. He then cast Lilith into the void where he intended for her to stay imprisoned for all time. 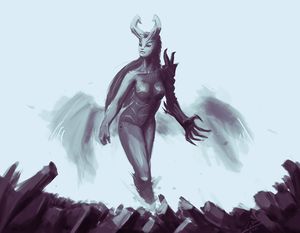 After an unspecified amount of time Lilith managed to return to Sanctuary from the void. How she did this is not known, but upon returning she quickly took up her old plan to raise the nephalem into her own personal army. Seeing what Inarius had done to the Worldstone, she traveled to Mount Arreat where she placed a spell on the Worldstone. The spell negated Inarius' dampening effect and began to increase the powers lying latent in humans.

Lilith was at a disadvantage against the Cathedral of Light and the Triune, which had both at this time a strong foothold on Sanctuary. Wishing to remain hidden from Inarius and her brother Lucion, she found the human Uldyssian in the small village Seram. She secretly set in motion a series of events that led to Uldyssian awakening his latent nephalem powers while subsequently being cast out of his home town and become hunted by both the Cathedral and the Triune. Disguising herself as the human Lylia, she then manipulated and eventually seduced Uldyssian into creating any army, called the edyrem, comprised of other humans who had had their powers awakened as well.

She silently guided and nurtured Uldyssian's abilities for a time until her disguise was disrupted by Lucion. Uldyssian, realizing what she was, became able to resist her charms and Lilith left his side.

Her plan had not failed however. Shortly thereafter she possessed Serenthia, Uldyssian's childhood friend, and under the guise of comforting Uldyssian she once again wove herself into his trust. At this time Uldyssian was snatched away by Rathma to travel to the Worldstone, and in his absence she took a stronger hold over the more prominent members of the edyrem, seducing them and turning them against Uldyssian. When Uldyssian returns he is captured and almost killed; it is only by the intervention of Achilios that Lilith is driven from Serenthia's body.

Prevented from influencing Uldyssian directly, Lilith then proceeds to take control over the Triune in the guise of her brother Lucion, who was earlier disposed of by Uldyssian. Assuming control with little problems, she begins to systematically break down the order through irrational and foolhardy decisions, none of which anyone in the order dares question. Her intent is to weaken all resistance against the edyrem, and her actions eventually help the edyrem overthrow the entire order.

Her final attempt at bringing Uldyssian to heel comes as his followers are laying waste to the Grand Temple of the Triune, and the final bastion of their power. She fails, but as she is defeated and the temple crumbles around her, she managed to fool both Uldyssian, and later Rathma, into thinking her dead. Her narrow escape is only temporary, as Inarius is not fooled. As she clears herself from the rubble he appears and once again casts her into the void.

Lilith is last seen in The Veiled Prophet where Mendeln, sent there by Trag'Oul to find Rathma, accidentally finds Lilith instead. She is not freed from her prison at that time however, and is presumed to still be trapped in the void.

Lilith has a body that resembles that of a woman, with enticing curves and feminine features, yet she is clearly a demon. Instead of hairs she has quills that run down her back and her tail, ending with several barbs at the tip. Instead of feet she has splayed hooves, four claws for fingers and a forked black tongue framed by sharp teeth.[1]

Lucion further claims that Lilith is the "desire of all creatures."[2]

Lilith is a manipulator and seductress, who prefers to work hidden rather than confront her enemies outright. During the entirety of Birthright she makes it seem as if Uldyssian is doing everything, from healing to destroying, to such an extent that no one can tell the difference.

She regularly seduces the men in her surrounding to do her bidding, and few can stand against her charms. The only being human known to have done it is Uldyssian.

In the Scales of the Serpent she also possessed Serenthia by, literally, jumping into her mouth. This confers almost complete control over Serenthia without any seeming permanent damage being done to the host.

In Diablo II, there was an event called the Pandemonium Event introduced. The quest required the player to find several keys and objects in order to open up a portal to a challenging event where players could fight Diablo, Mephisto and Baal all at the same time in much more powerful forms than normally. One of the bosses required to beat in order to reach the event was a monster using the Andariel model named Lilith. This was the first ever named appearance made by her, but the event is not considered canon.