Tomes, books containing lore in game, have been a staple of the series since Diablo I. Though the concept was utilized to a far greater extent in Diablo I, a few books did appear in Diablo II as well. These did not shed light on the greater conflicts of the universe, but instead provided some more specific information about various individuals and events from Sanctuary.

In addition to these there is also a Book of Skill acquired in Act II, however it is only a quest item that grants the player an extra skill point and does not contain any additional lore. 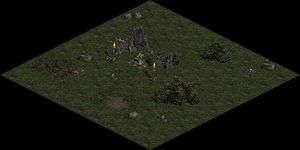 "...And so it came to pass that the Countess, who once bathed in the rejuvenating blood of a hundred virgins, was buried alive... And her castle in which so many cruel deeds took place fell rapidly into ruin. Rising over the buried dungeons in that god-forsaken wilderness, a solitary tower, like some monument to Evil, is all that remains. The Countess' fortune was believed to be divided among the clergy, although some say that more remains unfound, still buried alongside the rotting skulls that bear mute witness to the inhumanity of the human creature."

The Moldy Tome is found in a destroyed ruin in the Stony Field in Act I. It begins the quest The Forgotten Tower which tasks the player with killing The Countess at the bottom of the Forgotten Tower. 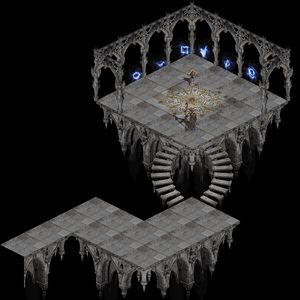 Horazon's Journal next to the Summoner

"Seekers of the Tomb of Tal Rasha will find it through the Portal. But know that the glowing glyphs recorded here in my Arcane Sanctuary are the signs of the six False Tombs. The missing Seventh Sign marks the Tomb of Tal Rasha... Of the Horadrim he might be called the foremost.

It was a shining - but brief - moment for the Mage Clans when they set aside their differences and worked together against the common enemy. The Horadrim relentlessly pursued the Three across the desolate Empires of the East, and even into the uncharted lands of the West, leaving the Archangel Tyrael's hands unblemished.

Presuming the Three to be vanquished, the Horadrim's unstable fellowship began to dissipate. Abandoning their sacred charge to safeguard the three Soulstones, the disparate Mage Clans began to squabble amongst each other over petty differences. Their conflicts not only dissolved their brotherhood, but strengthened the Evils which they had buried beneath the cold earth."

Horazon's Journal is found at the end of the Arcane Sanctuary, and when the player opens it a portal is opened to the Canyon of the Magi where Tal Rasha's Tomb is located. Six glyphs will be seen hovering next to the portal, and the seventh missing glyph will mark the true tomb from the six false ones. 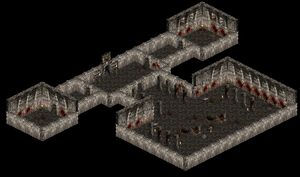 The Ruined Temple with the Black Book on the pedestal.

Lam Esen's Tome, also known as the Black Book, isn't readable like the other tomes and merely appears in the player's inventory like a quest item. Nevertheless, the NPCs in Act III provide a lot of information and clues about it's contents and purpose.

"It pains me to waste time with you, so I'll get right to the point. There is a very special book which you must find for me. It was written long ago by a sage known as Lam Esen, who studied Skatsimi magic and the effects of the Prime Evils on the mortal world. The Black Book was lost when the Children of Zakarum took over this land. Now, you must reclaim it without delay! Its knowledge may aid us in this dark time ahead."

"The Black Book contains powerful secrets of Skatsim, the Old Religion, long eclipsed by Zakarum. I should warn you. The Black Book is much sought after by both good and evil. Be wary."

"I've heard of the Black Book. My Order's code is based on many of its passages. If you find it, I will be greatly impressed."