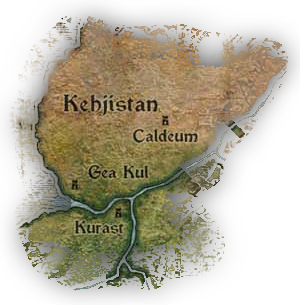 Kehjistan is a large expanse of rain forest that stretches from the Twin Seas in the west to the swamps of the east, from the Dry Steppes in the north to the Sea of Light in the south. Throughout most of human history Kehjistan has been at the center of attention: it was the region where most of the Sin War took place, the center of the Mage Clan Wars after that, immediately followed by the rise of the Zakarum which then proceeded to expand its influence across almost the entirety of Sanctuary. The greatest cities of the world have subsequently been here as well, from the original Kehjan to the mage city of Viz-jun, from the Zakarum center Kurast and Travincal to the present-day capital Caldeum.[1]

These limestone caves are located somewhere in Kehjistan and have old writings inside them which were once written in blood. The script reads as follows:

The script refers to the birth of the seven Great Evils and the seven realms of the Burning Hells that were created from Tathamet's smoldering husk. The cycles and the second paragraph seems to indicate the constant state of change and conflict that the realms of Hell experience.[3]

Some of the following material is outdated by the story in Diablo III.

On the eastern edge of the Twin Seas lie the emerald jungles of Kehjistan. Several thousand years ago, hunter-gatherers found themselves drawn to the lush, fertile rain forests and bountiful game inhabiting Kehjistan. But there was something else; Kehjistan’s geography was rife with nodes of magical energies, and eventually those with innate, arcane abilities began to sense and recognize these forces, gathering in groups to settle these special areas. It was here that the original mage clans, the Vizjerei, the Ennead and the Ammuit, were founded. Unfortunately the history of Kehjistan is not a peaceful one, and the Mage Clan Wars that erupted nearly destroyed the clans.

Geographically, Kehjistan encompasses almost one-third of Sanctuary’s eastern hemisphere. With an average rainfall of over four hundred inches per year, Kehjistan has the largest rainforests in the known world. This huge expanse of jungle feeds the Argentek River, which is the longest, widest river in Sanctuary. Hundreds of smaller rivers and tributaries twist and turn their way through the lush tropical forests until they finally unite with the mighty Argentek. Herbalists and alchemists revere the rainforest environment for its ecological diversity. Until recently, these sages would come from far and wide to study and collect the rare plants and animals that make their homes here. Now the jungle is far too dangerous to visit, let alone inhabit. Entire villages, even small cities have been wiped out. News has broken that Kurast, the current capitol of Kehjistan, is now under siege by the powers of Hell, and is kept safe only through powerful magical barriers that even now begin to ebb and