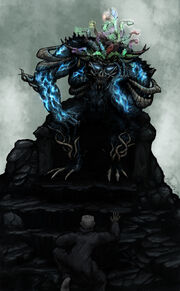 Kabraxis, the Banisher of Light is a very powerful demon lord mentioned in The Black Road (2001). He is also known as the Thief of Hope. Kabraxis was one of the first real Demons summoned from the Burning Hells by the experimenting Vizjerei mages. Once he set foot on the mortal plane however, he immediately started wrecking havoc in the lands of Sanctuary.

Kabraxis was summoned by the experiments of Vheran, a very powerful and skilled Vizjerei mage - one of the first to discover that humans possessed the power to summon guiding spirits from the outer planes - through a very large portal gate in the port-city of Ransim. As soon as Kabraxis set foot on Sanctuary, he started wreaking havoc among the populace. The mages there erected spell wards to isolate Ransim from the Eastern Kingdoms, where the Mage Wars were being fought. The city of Ransim was razed, sacked and the populace decimated by the sheer power of the demon lord and his minions.

Soon after, Kabraxis took notice of the wards that prevented him from leaving the area around Ransim. He saw that humans were a power to be reckoned with and chose a prophet among those who joined his cause, Kreghn. Kreghn went forth and spread the word of Kabraxis' cult, earning the title of the Enlightener. He was also known as Iceclaw the Merciless to the barbarian hordes of the frozen North.

Kabraxis taught his followers about the Three Selves, consisting of the Outer Self, the way a person portrays himself or herself to others; the Inner Self, the way a person sees himself or herself; and the Shadow Self. The Shadow Self was supposed to be the true nature of a man or woman, the part of himself or herself that he or she most fears — the dark part every person struggles hardest to hide. The followers of Kabraxis reveled in the exposure of their Shadow Selves. Four times a year, during the solstices and the equinoxes, Kabraxis’s worshippers came together and partied, reveling in the darkness that dwelt within them. Every sin known to man was allowed in Kabraxis’ name during the three days of celebration. And afterwards, they were forgiven their sins and washed again in the symbolic blood of Kabraxis.

Kabraxis had his followers create the Black Road - the supposed Path to Enlightenment. At the end of the road rested Kabraxis himself, seated on his infernal throne waiting for the most able and trusted of his followers to recieve their just reward: to be an incarnation of Kabraxis on the mortal plane - something that Kabraxis needed to remain in the mortal world. Nonetheless, many died, being unable to handle the energies and power that a true demon lord carried.

Soon, Kabraxis' power and influence grew stronger and came under the Prime Evils' eyes. They deemed Kabraxis a threat and imprisoned him within the gate that brought him into Sanctuary - between Sanctuary and the Burning Hells. Though, even after years passed without Kabraxis as a guide, his teachings were well propagated by many of his followers, the most recent one being Kukulach, who said that most people are too afraid of themselves to face that truth, the Shadow Self.

As centuries passed, Ransim became little more than legend and joined the ranks of many fabled cities from the bygone era, like Ureh and slowly the new city of Taruuk's Port came upon the smoldering ruins of Ransim. It was among the ruins of Taruuk's Port that Buyard Cholik, an adventurous Zakarum priest; Raithen, the Pirate captain; and Darrick Lang, captain of the Westmarch Navy intertwined their fate to reopen the portal and release Kabraxis from his imprisonment.

A struggle ensued and Darrick ended up slaying Kabraxis with the mystical sword Stormfury - the only sword that can kill Kabraxis. However, Darrick was cursed to be Kabraxis' new gateway into Sanctuary. Darrick must hold onto Stormfury in his hand for the rest of his life, because when he lets go of the sword, his hand transforms into a horrific demonic appendage. He has also been granted the power to heal others. When he uses the power however, Kabraxis becomes more powerful within Darrkick and is at risk of taking control.

The current whereabouts of this crafty demon or Darrick Lang are unknown at this juncture.

"Even seated, the demon was taller than Cholik standing up. The old priest guessed that Kabraxis was twice as tall as a man, perhaps even as much as fifteen feet tall. The demon’s massively broad body was black flesh, marbled with blue fire that burned and ran through him. His face was horrid, crafted of hard planes and rudimentary features: two inverted triangle eyes, no nose but black pits that were nostrils, and a lipless gash of a mouth filled with yellowed fangs. Writhing, poisonous vipers sprouted from his head, all of them beautiful, cool crystal colors of a rainbow" - The Black Road

These lines describe the Demon lord in his entirety when Buyard Cholik first meets him inside the Final Gate after passing all the tests that Kabraxis used to find his true chosen one. Cholik was later possessed by Kabraxis which resurrected his efforts to plague the mortal world again.

A comment made by Bashiok on the Battle.net forums has raised the question of whether or not several books set in the Diablo Universe should be considered canon or not[1]. Since The Black Road is apparently not entirely canonical, and since this is the only place through which we hear of Kabraxis, it is uncertain how much about him is true or not.