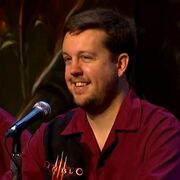 Jason Bender is the Senior Designer for Diablo III and is known to have worked on other game titles such as: the Command & Conquer series, The Lord of the Rings: The Battle for Middle-Earth series, Delta Force series, and combat flight simulator games including MiG-29 Fulcrum and F16 Multirole Fighter[1]