Archangel Itherael, The Aspect of Fate, is a member of the Angiris Council. Itherael has only made an appearance near the end of The Veiled Prophet so far where he voted in favor of saving Sanctuary along with fellow council member Auriel.

In the High Heavens he resides in the Library of Fate. 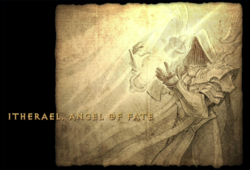 Archangel Itherael, The Aspect of Fate

Itherael is described as an Angel clad in gray. He is excessively neutral, showing neither male nor female traits in his unique aspect,[1] though he is referred to as 'he'. He cannot foresee the future, but he can see the various possibilities and strands that can happen. For this reason the rest of the council often consult him in dire and important situations. He cannot however see the fate of humanity or of any humans, and that vexes both him and the rest of the Angiris. [2]

When Sanctuary was discovered, he was among the three who supported the hidden world's existence. He reasoned that the humans, while being the spawn of demons and had the potential to be even fouler than the Demons themselves, were also borne of angels, and therefore had a potential to not only serve the light but to surpass the angels themselves in this task. Thus he voted that they be given a chance to evolve.[3]

Clearly distinct from all other angels is Itherael's ability to perceive visions of the future. These visions come from crystals stored in the Library of Fate, and though anyone can peer into them it seems no one but Itherael can truly decipher what is seen within them. It is unknown just how clear these visions are and whether or not they are absolute; Imperius has allegedly often asked Itherael if the High Heavens will eventually win the Eternal Conflict, and Itherael has never given him a straight answer in the question.[4]

The Scroll of Fate is an item which provides Itherael with answers in times of dire need. What kind of answers it provides is unknown.