Archangel Imperius, The Aspect of Valor, is a member of the Angiris Council. He first appeared in The Sin War series of novels and is depicted as the most hostile of the angels towards the existence of mankind. Thus far, he has appeared in Diablo III.

He resides in the Halls of Valor in the High Heavens. 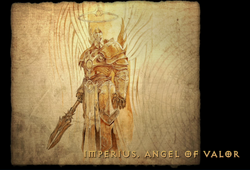 Archangel Imperius, The Aspect of Valor.

Imperius is the warrior of the Angiris Council and the commander of the Heavenly Host. In success it is he who most daringly exploits hell's weaknesses, and in retreat he is the rallying cry of the armies of Heaven.

He lives to slay demons. He has killed billions of them over the course of his existence,[1] and so because of their demonic heritage he was the most outspoken member of the Angiris Council against allowing humans to live:

"THERE IS NO NEED FOR THIS DEBATE TO CONTINUE…. OR TO HAVE EVEN BEGUN, declared a majestic angel with robes of royal red and a shining breastplate upon which the image of an upturned sword blazed. THE PATH IS OBVIOUS…. WHAT HAS BEEN WROUGHT BY THE TRAITOR MUST BE UNDONE! LET THE HOST FINISH WHAT IT BEGAN, EVEN IF WE MUST CUT THROUGH A HUNDRED RANKS OF DEMONS TO ACCOMPLISH IT!"[2]

He doesn't always see eye to eye with Tyrael, particularly when it comes to Sanctuary and humanity, yet though there doesn't appear to be outright hostility between the two. Before he knew Tyrael's stance on humanity he did call him friend:

"WELL, OLD FRIEND? asked Imperius. HOW WILL YOU CHOOSE, YOU WHO HAVE SEEN THEM AT THEIR MOST FOUL? WILL YOU VOTE WITH ME AND PUT AN END TO THIS MOST HEINOUS OF SPAWNING GROUNDS?" [3]

Before the Sin War ended, Imperius seems to have had a good relationship with Tyrael, both great warriors and fervent enemies of Hell wherever its presence might appear. When Tyrael developed sympathy for humanity and brokered the truce between Heaven and Hell however, he effectively robbed Imperius of his very purpose. Unable to prove himself, Imperius has apparently become obstinate on the council and somewhat of a tyrant.[4]

In the Opening Cinematic, he is the first Angel to strike the hordes of the Burning Hells, and demonstrates deadly power and skill in combat with them, wielding Solarion to break through their infernal forces.

The Wrath of Angels

In Diablo III: Wrath, Imperius is the last member of the Angiris Council to attack Hell's demons, easily slaying a massive, grotesque one-eyed fiend after it brutally kills one of the angels under his command. Imperius commands the Heavenly Host to pursue the demonic hordes as they retreat, and, instead of stopping to regroup the angels as Tyrael seeks and advises, presses onward alone to confront Diablo himself in his unholy lair, where the Lord of Terror has already slain many of those whom Imperius had sent forth.

After a short but fierce struggle, despite holding his own and managing to wound Diablo, Imperius is incapacitated, freed only by the timely intervention of the rest of the Angiris Council. Together, the Council manages to quickly overwhelm and constrain Diablo, and despite both Auriel and Tyrael expressing their desire to imprison the demon and thus turn the Eternal Conflict in Heaven's favor (as Terror itself can never truly die), Imperius brashly overrides them and savagely slays Diablo regardless, sealing his triumph in blood, but in turn undermining and weakening the very unity that had been the Council's greatest strength.

Thousands of years later, after the Conflict is brought to a "grinding halt" with Sanctuary's creation and the Worldstone is destroyed by Tyrael, Malthael disappears and abandons Heaven, leaving the Council broken. In the Silver City, Imperius harshly condemns Tyrael for transgressing against the angels' laws and continually interfering with the mortal realm; Tyrael's mockery of Imperius and his inaction provokes a skirmish between the two, ending with Tyrael claiming Solarion and declaring that as the angels and the Council were meant to "protect the innocent" yet did not do so, he would no longer stand as one of them, subsequently falling to Sanctuary in human form in an attempt to warn mankind of the coming darkness threatening to engulf all.

After Diablo possesses Leah and combines the powers of all seven Evils within himself to emerge as the Prime Evil, the Lord of Terror ascends to the High Heavens and reaches the Diamond Gates, only to be confronted by Imperius, who forces him to reveal his true form. Diablo quickly overpowers and severely wounds Imperius, even breaking the Spear of Valor, shattering the Gates for the first time ever and storming the Silver City.

The nephalem heroes and Tyrael pursue Diablo and reach the High Heavens as well, encountering a bitter and recovered Imperius who blames Tyrael and the nephalem for Diablo's invasion of Heaven; Tyrael insists that Imperius cannot face Diablo again due to his wounds having barely healed. Within the Crystal Colonnade, Imperius appears and instantly destroys seven demons, but harshly informing the nephalem that they do not belong in the Heavens; Auriel and Itherael's presence apparently dissuades him somewhat, but Imperius nevertheless threatens to kill the nephalem should he see them again.

At the Pinnacle of the High Heavens, Imperius and a battalion of warrior angels at first bar the nephalem and Tyrael's way, with a wrathful Imperius demanding whether the nephalem thought themselves strong enough to fight him and vowing to deal with Tyrael as well. However, Diablo's timely corruption of the Crystal Arch renders Imperius and his angels powerless. Although Imperius survives, it is unclear what ultimately happens to him after the Light of the High Heavens is restored and Tyrael rises to Malthael's throne to stand as Wisdom.

Imperius' weapon is Solarion, a spear said to have been forged in a dying star. The spear is an extremely powerful weapon, and given that it belongs to Imperius himself probably one of the most deadly as well. The archangel doesn't always carry the spear with him, but rather summon it to his side when he needs it as a lance of light.

It is seen from the same Act IV mentioned above that Solarion is shattered by Diablo. However, in the cut-scene previous to the fight with Diablo, Solarion is apparently intact again.

While it is unclear whether the official artwork depicting an angel with blazing wings is in fact of Imperius, some fans of the universe familiar with the novels think that his role as antagonist of men make him a perfect character to introduce.

Imperius is voiced by Rick Wasserman.