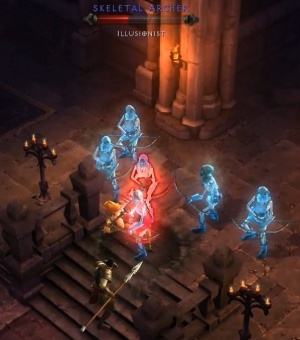 Illusionist is an trait that is unique to Diablo III. It was thought to have been removed in Beta Patch 6 in response to the abuse of farming Wretched Mothers for XP bonuses, but it was later added back.[1]

The Illusionist trait imbues a creature with the ability to create clones of itself. The clones have less health than their parent, are not able to use their parent's traits, and only deal a fraction of their damage. Some secondary abilities are not mitigated such as pools of fire left by fireballs from Blazing Guardians, or the gas clouds from a dead Accursed.

This trait can occur only for monsters equal to or greater than level 26.[2]