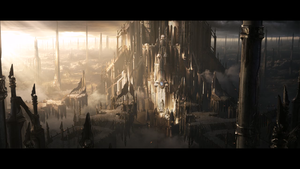 The High Heavens from the Diablo III Closing Cinematic.

The High Heavens are the spiritual location of the forces on the side of light. The armies of Heaven are commanded by the Archangels of the Angiris Council.

The war between Heaven and Hell has been raging long before the existence of mortals. Both sides have gained and lost much from the conflict. Heaven's main goal is the abolition of pain, suffering and sin, whereas Hell would love to enslave mortal man in a wrath of destruction and sin. Heaven has an agenda of preserving absolute, perfect order and harmony amongst all beings. Heaven protects humanity from the corruption, greed and destruction caused by the Burning Hells. They wage a Holy war against everything that the Prime Evils stand for.

(From The Kingdom of Shadow)

The archangel had opened the very gates of Heaven to the mortals of Ureh, opened to them a place where not even all three Prime Evils combined could have made the slightest incursion. All the people of Ureh had to do was find their way there.
Captain Dumon had always imagined Heaven as a place of light, a place where darkness could never invade.

The Heart of the High Heavens is the Crystal Arch, a probable analogue to the Burning Hell's Hellforge.

Notably, as Deckard Cain mentions in the Book of Cain, many humans of Sanctuary believe or believed that the souls of the virtuous were committed to the High Heavens (with the spirits of evildoers sent to the Burning Hells), but as Cain notes, there is no evidence as of yet to actually support this belief.

The humans of Sanctuary also call upon the power of the High Heavens in combat with the forces of the Burning Hells. For instance, the Horadrim priest and warrior Cathan found that by invoking the powers of the High Heavens and then infusing them with the essence of Fire, a bolt of great speed and intensity could be created and used by those otherwise untrained in the use of magic against the undead, and skilled Paladins of the benign Zakarum faith, striving to serve the very Light that the Angels themselves follow, can summon the Hammer of Ghrab Thaar and call down lightning from the skies to smite their enemies.

In Diablo III, the High Heavens is attacked by Diablo and his Demonic Legion, and the Lord of Terror razes the Diamond Gates for the first time in history. He severly wounds Imperius, and the Host of Heaven is scattered. Diablo sends Iskatu and Rakanoth to stop the nephalem, and they capture Itherael and Auriel. On the way to the Silver Spire, Tyrael and the group of nephalem encounter Tyrael's old lieutenent, Izual, and slay him. Diablo manages to corrupt all of Heaven, until a group of heroes slay him and cast him off the edge of the Silver Spire.

The following are confirmed locations of the High Heavens. Many of the listed locations are located within in the Silver City, which was visited in the final Acts of the third Diablo game.