The grotesques may seem slow and senseless, but they hide many dangers within their hideously malformed bodies. A set of spikes lurks beneath the monsters' flesh and foul parasites nest within them. It is said that these horrors themselves are constructed by a greater evil... a darkness that I cannot even fathom. 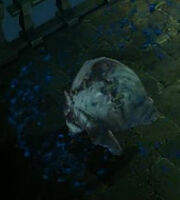 A Grotesque about to burst into Lampreys.

Grotesque are fleshy, undead constructs that have stitching all over their bodies. They are capable of dealing melee damage with a set of spikes hidden under the surface of their skin. Grotesques can also stomach-bump players back. Like a pinata, smaller monsters contained within the Grotesque will burst out upon death.