Gold Sink or Item Sink are terms that refer to any method the developers use to remove value from the in-game economy. This is done with the intent of managing the economy in the long term by ensuring that the wealth generated by players from looting monsters is gradually removed. The end result, if done right, is an economy where inflation is kept in check and the value of items does not decrease too rapidly over time.

Though gold sink in general refers to just gold, it also encapsulates any method which removes value from the economy. 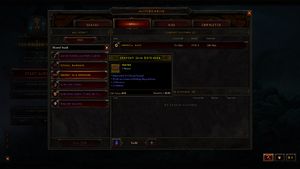 The Auction House, which removes value from the economy in the form of gold and Battle.net Balance.

Sinks in Diablo III are mainly handled by the artisans and the functions related to them, as well as the Auction House. Vendors also serve a small role as gold sinks.

Games like Diablo III suffer from the "problem" of being games: their primary intent is not to establish a healthy trade economy but a fun experience for the customer. This necessity of enjoyment places the developer in a predicament. An example is the player's wish to constantly improve their character. This necessitates the player slowly finding better and better items, a goal which also has the effect of constantly increasing the supply of powerful items in the economy. This is marginally offset by new players joining the game and new characters being created, but each new player also begins to kill monsters and thus drop items, eventually driving up the supply relative to the player base again. Since items are never forcefully destroyed, a player never needs to rebuy an item once it is acquired, which saturates the economy and steadily removes buyers from the market. In Diablo III, item sinks provided by the artisans attempt to counteract this.

This same methodology applies to gold. Unlike a real life economy which mostly transfers gold from one buyer to a seller, gold is primarily acquired and indeed generated through killing monsters. One player killing a monster does not reduce the gold amount any other player possesses, which over time leads to excessive gold accumulation in the economy, thus reducing the value of each individual gold piece. Gold sinks are the methods employed to combat this function.

The Purpose of Gold and Item Sinks

Gold sinks exist to maintain the amount of gold in circulation, thus limiting inflation. This is necessary in order to establish gold as a common currency used by players; if gold inflation is not managed it loses its function as a currency since players cannot determine what their items are worth. Situations like these arose in Diablo II, which lacked sufficient gold sinks and too common gold drops. The result was that the Stone of Jordan was used as currency instead, a unique and very valuable ring which gave the community a stable currency. As the game progressed Runes replaced SoJ's as the common currency.

The gold sinks in Diablo III are primarily handled through the artisans. The heavy focus on crafting items, merging gems and enhancing items will require a continuous gold expenditure. Since item enhancements and item forging generate random properties, players can still benefit from further enhancing and forging even after the initial use. Acquiring better base gear will also require further enhancing, as enhancements cannot be transferred from one item to another.

One of the most important difference in an in-game economy is that items, or the net value of items in the economy, doesn't naturally deteriorate over time. A sword such as Azurewrath, once looted, is just a digital piece of code and can remain in circulation indefinitely. Even if it breaks, a gold cost can return it to perfect condition: there is never any reason to replace the sword with an identical new one that hasn't been worn down by time, as would be the case in the real world.

This becomes a problem when more and more Azurewrath swords, or any item for that matter, drop each day and are added to the economy. At first this is not a problem, since there still remains a large enough player base to soak up the new items, but as the economy is saturated the items quickly lose their value.

To combat this Blizzard focuses on randomizied items and improvements delivered both through drops and the artisans. Randomized stats on items fullfills the purpose of giving players stronger and stronger items while at the same time keeping their demand for the same item. This is illustrated by the following imaginary item (reminiscent of Azurewrath datamined information):

A player may get their hands on one version of this item with only +82 Precision and the random property being +experience (worthless for a maxed character), which would be inferior to an identical weapon that spawned with +91 Precision and a better random modifier, such as +50 Attack. Even after acquiring the first item, the player would be inclined to improve it further.

The same principle applies to the Artisan upgrades, particularly the mystic's. each item enhancement is randomized to choose from a range of values when determining the bonus applied to the item, and thus the player has an incentive to continue to enhance the same item until the optimal enhancement is placed upon the item.

Ultimately, both item and gold sinks can at best delay the stagnation of an economy. The fundamental problem discussed above is merely managed, not prevented, by these methods. The player still needs to be continually rewarded in the form of better gear, and even with methods to randomize items and enhancements, players will, given enough time, max their characters or come close to it.

One might suggest Blizzard release new and more powerful items to offset this, but without balance changes to the game and enemies, this will lead to players, already at peak power in the game, to outclass enemies and threats even more easily. As such, the most common way to adress the problem is to release additional content, such as an expansion pack, which increases the difficulty and gives the players access to new items, thus restarting the process.