Goatmen or Khazra (as revealed in Diablo III) are demons that are found in all three of the Diablo installments. They appear as bipedal goats wielding melee weapons such as axes and other polearms 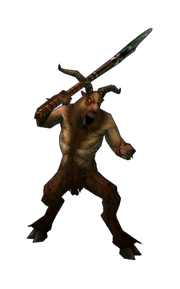 Goatmen are Animals. The only type of goatman yet named in Diablo III are Moon Clan Warriors, but it's certain there will be various clans of Goatmen, as there were in Diablo I and Diablo II.

The goatmen foot soldiers seen thus far are much as they were in Diablo II. They mill around in medium-sized packs, wielding huge two-handed polearms, and attack quickly, but not very effectively. The Diablo III goatmen have quick footspeed and a fast swing, but they pause for a long time between attacks. Their death sounds seem to be improved over how they were in Diablo II, though they are not quite as delightfully bleaty and goaty as they were in Diablo I, when their enticing noises put them amongst everyone's favorite monsters to kill. Goatmen Shaman are a new type of goatman in Diablo III, though it is not yet known what types of buffs or resurrection spells they might possess.

Goatmen are now found in camps, and in the WWI 2008 gameplay movie, a vast mob of them comes running out from behind a tent.

Goatmen return in different acts of Diablo II. Their appearance is similar to that in Diablo I, and they often wield bardiches in battle.