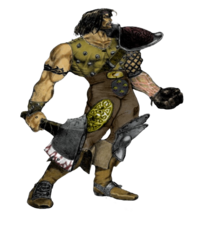 Gladiators are true masters of melee combat. Their ability to inflict tremendous melee damage is unparalleled. They can also wield any type of weapons (including bows and staves) quite effectively. But they prefer either two weapon style or axes. Less often - bows. The biggest of Gladiators receive bonus to their damage from vitality when wielding axe. They don't use shields very much as they don't benefit from those as others, and they prefer to cause more damage than hide behind the shield.

Their stamina has incredible potential and compensates fro the lack of defense. They scorn magic and spellcasting, their magic potential is nearly non-existent, and their spellcasting speed is very low. They start with Reflect skill, which can be used to return some of the melee damage received back at the attackers, at the cost of temporary decreasing character's resistance to melee damage. Other classes can also learn Reflect from books, but only Gladiators can cast it without using mana.

Stats to focus on, in order of importance: STR, VIT, DEX, MAG