There are many new concepts introduced in Median that did not exist in Diablo II.

In Median XL, direct damage spells gain a damage bonus from energy. Putting points into energy causes your spell damage to go up. The amount of extra damage gained per additional point of energy is lower if you already have lots of energy to begin with.

The energy factor bonus on some caster items modifies this curve, enabling each point into energy to provide a significant benefit until much higher levels of energy.

If your energy is low, you may not even notice any difference.

If you have 1000 energy or more, seeking out energy factor gear starts to pay off.

If you have 2000 energy or more, go all out on energy factor equipment.

As in the examples, energy factor bonuses are insignificant at lower levels of energy, but become quite powerful at higher levels. A difference of +100% damage equals about 5K to 10K damage for most spells.

This rare modifier can only be found on some legendary items and the druid's Force of Nature skill. It functions the same way as energy factor, but is based on strength instead.

In patch 1.E9, strength factor was fixed and now works on non-druid spells as well.

Blocking and defense rating in Median XL work much the same as in classic Lord of Destruction, but their role in the game has changed.

In Lord of Destruction, max block (75% block) through investment into dexterity was common, while defense rating was hardly worth it. The two statistics are much more balanced in Median XL.

The chance to be hit is as follows:

Investing into defense pays off if you can get around 20-50K defense at level 120, at which point you will see a noticeable improvement in your chance to be hit. Some builds can go over 100K defense.
Important: In Diablo II, defense is ignored when you run. Use 'R' to switch to walk mode to preserve your defense. Walk speed has been much improved in Median XL.

Block rating was changed heavily in 1.E9. Your chance to block now depends on character class, not your shield.
You may have noticed that the listed block chance on shields is very low, between 1% and 5% depending on shield type. This is because block rating is boosted by dexterity as follows:

Max block is hard to reach; you will need to invest heavily into dexterity. This is a balance measure in Median XL to ensure that shields do not outclass two-handed weapons as in classic Lord of Destruction.

In Median, Resistances are necessary to survive the Terror and Destruction difficulties. They are also required to survive some of the harder heroic bosses like Quov Tsin, Astrogha, and Belial. For these you need to stack resistances so the overall total per resistance is in the 500s and also have all resistances above 90. In addition in the numerous uberlevels, you need a max of 250 overall resistance to survive them. You should have full resists for the difficulty when you reach act 3 of it. As a rule of thumb, each time you get to act 3 in the new difficulty, you should have near maxed resistances for that difficulty You can increase the max resistances by using perfect gems which increase the max resistance by 2 and by getting charms from destruction uberlevels specifically the Crystalline Flame Medallion which can be gotten via the Judgment day summoning quest.

This is a classic Lord of Destruction feature that is not known to all players.

During a single player, tcp/ip or open battle.net multiplayer game, press Enter and type the following:


Where X is a number from 1 to 8. Press Enter again. The game will confirm your action.

What this does is increase the difficulty of the monsters, as well as their rewards, to correspond with a multiplayer game with X players in it.

Monster life and experience is greatly boosted, monsters are more likely to drop items and their damage is slightly boosted on Terror and Destruction difficulty.

The Hard Mode Charm is a special drop from Baal in Hatred difficulty. When you keep it in your inventory, it makes nearby monsters stronger but rewards you with increased magic find.


When the charm is active, monster health bars appear less than full. This is a bug with the Diablo II game engine. The monsters still have the correct life bonus.

Invulnerable ethereal demonic spirits that may appear near places of power. They cannot be destroyed, but present a deadly hazard for the unwary adventurer. 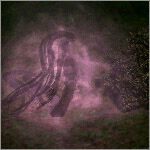 A violent death often leaves a spirit or poltergeist behind. Most spirits are weak, manifesting only as a sobbing on the wind or dancing ghost lights at night. Some grow stronger in death and guard their final resting place with unholy fury.


A witch is a rare sight, but great care should be taken around them. They are invulnerable to any attack or spell but are not aggressive and do not move. However, do not come too close and startle a witch - or else!... Their shockwave attack bypasses all defenses and attacks the victim's soul, killing instantly.

Strategy
Give a witch wide berth to avoid upsetting her. They do stand out from the crowd and their eerie song can be heard up to a screen away. A witch will laugh when she is about to pounce - when you hear this, run away immediately!
If a witch is completely blocking your path, summon a minion near her. She will kill it and then remain inert for a few seconds, giving you an opportunity to run past. 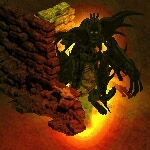 Using hell's power against it is a dangerous path to follow. Many believe warlocks are cowardly and weak, using easy power at the cost of their own soul. Instead, most warlocks are demon hunters, sacrificing their immortal soul for the power to cleanse Sanctuary.


A powerful warlock may be able to resist the pull of the Burning Hells, getting stuck in the void between planes - a feared fate for most people, but the best possible outcome for a warlock. Warlocks that cannot overcome their curse end up like this.

Strategy
While less dangerous than witches, a warlock will rapidly cast homing punishers until out of mana. The spiked balls slowly but relentlessly follow their victim, dealing massive damage on impact. Listen for the demonic whispers announcing the presence of a nearby warlock.


If running away will result in unwanted enemy encounters, try running around an obstacle so the punishers collide with the obstacle.