We would love to get your opinion on your experience with our site with a short survey. Take Survey 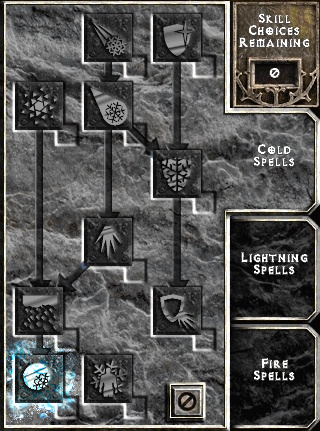 Frozen Orb is the final Cold Spells skill that the Sorceress can learn. When cast, it spins before the caster, emitting Ice Bolts in deadly, pulsating spirals that cut through large crowds of enemies quite nicely. Do not let the low damage-per-bolt ratio make you think less of this skill- when that many Ice Bolts hit the same group of enemies in quick succession, it makes a force to be reckoned with.

Frozen Orb is arguably the most effective spell in the Sorceress' arsenal. Since it only has one synergy Ice Bolt, and only receives a measly 2% damage increase from it, Frozen Orb is most often used by dual- or tri-elemental builds. A pure cold Sorceress should instead opt to use Blizzard, due to its great damage potential from three different synergies.

An intimidating sight that strikes fear into the hearts of the Sorceress' opponents, the Frozen Orb is an awesome spectacle to behold. The Orb coalesces from the air, unleashes freezing bolts at all nearby, and wreaks havoc, seemingly at random, before bursting into a brilliant explosion of frigid destruction.[1]