Fire Wall Sorceress by Kickin It

The Fire Wall Sorceress, as the name implies, is a Sorceress build whose primary attack is Fire Wall. This build can be very fun to play and, with the proper gear, can become devastatingly powerful. One thing to keep in mind is that the listed damage is per second, while the Fire Wall lasts for 3.6 seconds, so the spell actually does significantly more damage than the tooltip indicates. The trade-off for this power, however, is a somewhat counter-intuitive targeting system that can have a steep learning curve. Fire Wall is not like most skills in Diablo II, where the preferred targeting method involves clicking on a monster. While this can be effective with Fire Wall in some situations, to get the most out of the spell, you will have to learn how to make the best use of the way the Fire Wall "grows." When a player casts Fire Wall, the wall expands from the cursor at a right angle to the character. That is, if you draw a straight line between the Sorceress and the cursor, the Fire Wall will intersect the line at a 90-degree angle (see the image at the bottom of the Skills section of this guide). This can be both beneficial and frustrating. It allows the Sorceress to destroy enemies around corners or in other places where the monster can't reach her. However, it can also be difficult to get a monster into the wall, as it has a relatively thin area of effect. Often times, growing the wall in the correct direction requires you to click far away from where the target monster actually is on the screen, which can sometimes lead to Fire Walls that miss the target altogether. This may be frustrating for some players, though it may be a welcome challenge and a change from the usual for others. This can be a surprisingly effective build for leveling, though players without the proper gear may run into some challenges in late Nightmare and Hell with immunities. 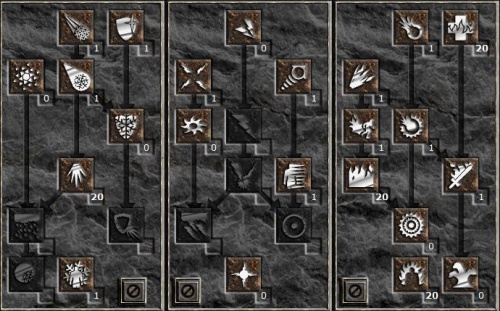 The base skills for this build will require level 81 to max, leaving 18 points to place in additional synergies or other skills. 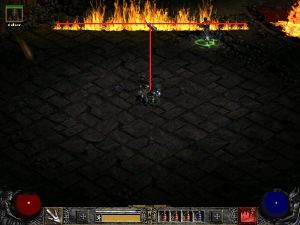 As I have mentioned, the remaining 18 skill points you will have after maxing the base skills for this build are best spent in either Inferno or Enchant. There are benefits to choosing either path, so make your decision based on your preferred play-style. The numbers I will present in this section are based off of having all of the gear listed below. It does not include Charms or the extra damage from your Mercenary's Conviction Aura, so most of these numbers will actually be higher in practice.

As you can see, 18 points in the Inferno synergy will result in a higher increase in damage than if the points were put into Enchant. However, you must also take into account how often a monster will be taking damage from your Fire Wall versus how often your Mercenary will attack and whether you prefer team or solo play. In the end, it really comes down to personal preference, as both are certainly worthy choices.