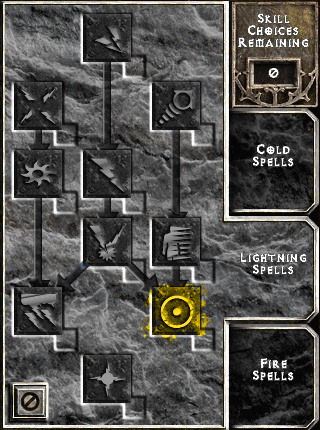 Energy Shield is a fairly useful skill for the frail, high-energy player of the Sorceress. It takes a certain percentage of damage, as indicated by its skill level, and forces it upon the player's mana, instead, acting as a sort of primary shield against damage. Diverting damage from your health keeps you alive longer, and if your energy is very high (while your vitality may be very low), you will live much longer than if you took the full amount of damage. It runs out after a length of time.

This skill mostly absorbs magical damage, but it does also absorb some physical damage. It's a must for any high-energy based Sorceress, as it will absorb a large portion of elemental and physical damage (it only absorbs a small amount of poison and non-elemental magic).

At first, the ratio of health-to-mana is 2:1, meaning for every health point, 200% of that gets taken by your mana. If you invest points in Telekinesis, each level therein will increase the effectiveness of Energy Shield by 6.25%, and by the time Telekinesis reaches level 16, you'll be at a 1:1 ratio of health damage per magic damage. That isn't to say go cram a bunch of points in to Telekinesis, but only hard points spent in the skill are considered for Synergy bonuses.

Sheathing herself in pure energy, the Sorceress walks fearlessly into the fray. So long as she can maintain her concentration over this magical buffer, she diverts harmful magical energies and absorbs physical harm into her store of Mana.[1]