Easter eggs are hidden jokes and messages in-game that have references in pop culture, other video games or development surrounding Diablo III.

When the player travels through Act IV and the Templar accompanies him/her, he sometimes states: "The sanctity of this place has been fouled". This is the player characters' quote from Diablo I upon entering Level 1 of the Dungeon.

Paul Eiding's voice performance for New Tristram's Mayor Holus in Act I highly resembles his previous voice acting for Pepin the Healer in Diablo I.

Wirt's Original Leg can be dropped from a body in one of the first act's caves. This is a reference to Wirt, a merchant in the first Diablo who allowed players to gamble. Wirt had tragically lost one of his legs when demons first began appearing in the Tristram Cathedral. His peg leg could be found as Wirt's Leg (Diablo II), an item which could have up to three sockets and was required in order to open the Secret Cow Level in Diablo II. Wirt's Original Leg would then be a reference to his remaining, skeletal leg, the "original". 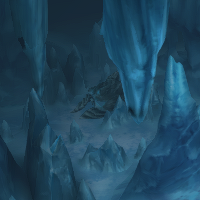 The helm of the Lich King can be found in any icy tileset, such as the Caverns of Frost or Icefall Caves. It is a reference to the Lich King character from the Warcraft franchise.

In the Stinging Winds (Act II), there is a broken down ship in the middle of the desert. If you're lucky enough to find it, you'll also encounter very short event that will give you one of 6 special pages:

The page numbers are a reference to the ever-famous "magic numbers" in Lost. The Black Rock is also the name of the ship from Lost that was stranded on the island in the fashion described in the found ledger pages.

Probably the most well-known and obvious Easter egg in Diablo III, Whimsyshire is a secret level accessible in each difficulty after crafting the Staff of Herding. A nod to the Cow Level from Diablo II, the secret level was discovered a single day after the game's release. The music from this area is an 8 bit version of Ravel - Gaspard de la Nuit, but played in reverse. "Gaspard de la Nuit" is an old French expression for the Devil. When this was discovered many people believed this to be the start of a hidden ARG in Diablo III but this was not found to be true.[1].

Development Hell is a dungeon that spawns in the Cemetery of the Forsaken in place of a Defiled Crypt location. In it you will find that every enemy is named after a Diablo 3 game developer. For example, one elite mob that spawns is Jay Wilson, the lead game director for Diablo III. It will spawn in Normal, Nightmare, Hell, or Inferno difficulty. You even get a Feat of Strength for killing him.

Quality Well is a small dungeon that can spawn in The Old Ruins. Inside, each monster is named after a different member of the QA team that worked on Diablo III. It can appear on Nightmare, Hell, or Inferno difficulty.

The Fowl Lair is a small dungeon that can spawn in Desolate Sands. Inside, there are many chickens, and a single Greasy Pig. It will drop loot similar to a chest.