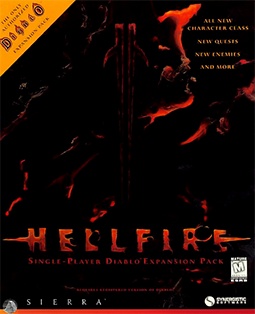 Diablo: Hellfire is an expansion pack that Sierra On-Line (now known as Sierra Entertainment) produced for the computer game Diablo. It was released in 1997 and developed by Synergistic Software, a Sierra division.

Hellfire's storyline occurs as an aside to the main story arc of the original game. A sorcerer, while performing a ritual, unknowingly releases the demon Na-Krul unto the town of Tristram, but before it can completely escape, the sorcerer magically seals the doors. The player is later tasked with venturing into Na-Krul's lair and vanquishing it.

Na-Krul being summoned into Sanctuary

The expansion pack adds several enhancements to Diablo, including an additional Monk class, two new dungeon settings, namely The Festering Nest and the Demon Crypts, additional quests to undertake, several extra game items, including oils which affect item statistics, runes that can be placed as traps, a new page of spells, new affixes for weapons and armor, new shrines, new miniboss enemy names, a noticeable boost to Diablo's strength and power, and a number of interface improvements.

Hellfire integrates into Diablo, and because of its design, its dungeons can be avoided entirely. In order to gain access to the dungeons, the player must speak with Lester, who is north of Tristram, near the herd of cows. However, if the player speaks to Lester before reaching a certain point of the main Diablo quest, he will be hesitant to ask them to enter the new dungeons.

The rest of the expansion integrates more fully into the main adventure. Objects like oils, new weapons, rings and armor, and runes drop amid other more common kinds of items, and the new spellbooks, including books for two previously existing spells that did not have books, and scrolls are found in the same kinds of places. New shrines are found where shrines would normally be found. The new unique monsters, which appear as palette-swapped, but otherwise normal monsters with a unique name, also appear in the Diablo quest like any other. It should be noted, however, that there are almost no unique monsters found within Hellfire's exclusive dungeons. The Hellfire dungeons are populated with new enemies that do not appear in the main Diablo quest, however. The difficulty of Hellfire dungeon floors 1-8 mirror those of levels 9-16 of the main Diablo quest, requiring experienced characters to explore.

Some of the newer convenience features include the option to move more quickly around town using the "jog" toggle found in the options menu, a spell that highlights objects lying on the floor as though the cursor was placed over them, and a spell that teleports the player to the nearest exit found on that level of the dungeon.

Hellfire is the only expansion pack released for Diablo. Blizzard Entertainment has never released an official expansion of its own.

Hellfire generally received favorable reviews from the game magazines at the time.[1]

Criticisms of the expansion include:

The Hellfire storyline is not taken into account during Diablo II. It was not released as a part of the Diablo Battle Chest, but did receive its own Diablo/Hellfire bundle, published in 1998 by Blizzard Entertainment.[2]

However, in Diablo II, Blizzard North later implemented insect caves and crypts that bear similarities to those in Hellfire. A few of the convenience features introduced in Hellfire were also added in Diablo II as fully-fledged functions, such as being able to run to cover ground more quickly, and being able to highlight items lying on the floor by button press, instead of by spell.

Two additional characters, the Bard and Barbarian, and two additional quests can be enabled with a special text-file edit in the Hellfire installation directory. This is accessed by modifying the Command.txt file.

As test characters, these classes have new skills and attributes. The Bard can use two one-handed weapons, one in each hand. The Barbarian can hold Two-Handed Swords, Great Swords, and Mauls in one hand, and still be capable of carrying a shield in the other. They do not have unique character graphics developed for them, appearing in-game as the rogue and the warrior, respectively.

The hidden quests are the Theo quest and the cow quest. The cow quest appears first by turning Lester, who allows the player to unlock the hive, into the "Complete Nut", who wears a cow suit. After giving the player a rune bomb to open the hive level, he will send the player off to recover his suit. Once the player returns the brown suit to him, he rewards them with the Bovine Plate. The cow quest was based on an internet joke that directed players to complete a series of silly objectives to unlock a secret cow quest.

The Theo quest is given by a little girl standing by a tree near Adria's shack. The player must kill the Hork Demon to retrieve Theo and acquire the reward. If this quest is not activated, the Hork Demon drops the amulet himself with no diverting storyline.

Diablo was an archetype of the modded video game. There are quite a few modifications for both Diablo and Diablo: Hellfire. Diablo: The Hell is the most recent one among them. Its English forum tries to cover all other mods for the game as well.

From Diablo Wiki, a Wikia wiki.
Retrieved from "https://diablo.gamepedia.com/index.php?title=Diablo:_Hellfire&oldid=150424"
Category: