From Diablo Wiki
(Redirected from Demon)
Jump to: navigation, search 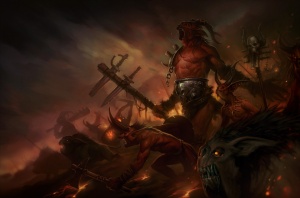 Demons are beings that stem from the Burning Hells, the remains of Tathamet. There are a host of different forms of demons, ranging from weak and animalistic in their intelligence, such as the Fallen, to the incredibly strong and powerful Prime Evils. Demons sprang into existence along with angels, Anu and Tathamet obliterated each other, and are their anti-thesis: angels are beings of light and order while demons embody shadow and chaos. All demons are selfish and opportunistic beings who value their own existence above all else and continuously seek power and dominion over those they deem to be weaker.

All demons were originally ruled over by the Prime Evils, but since the Dark Exile most are now servants of Azmodan.

It is important to note that demons and undead are two different things. The undead are oftentimes used by the forces of Hell in their armies, but there appear to be no undead demons at all. All the undead seen in the games and books were either animals or humans while they lived.

The Burning Hells are ruled over by the Great Evils, first by the Prime Evils and presently by Azmodan. There appear to be no other set ranks in Hell. Powerful demons aspire to usurp the places of those above, all with the intent of receiving the favor of their respective Great Evil. One example is Astrogha who during the Sin War attempted to wrest control of the Triune from Lucion and in so doing strengthen Diablo's support of him.

Only two known demons are known to have actually tried to usurp the place of the Great Evils without being a Great Evil themselves, those are Lilith during the Sin War and Kabraxis from The Black Road. It is uncertain whether the latter is canonical.

For information about the Prime and Lesser Evils, see Great Evils.

There have been hundreds of various breeds of demons shown in the various games and books, too many to list here. Below follows a list of notable demons instead

There are no other known formal ranks in Hell. All other demons serve the aforementioned Great Evils directly or indirectly through another more powerful demon. We do know of several demons who are factors of power in their own right.