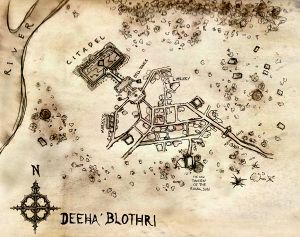 Deeha'Blothri (a reference to and pronounced the same as "Diablo Three") is the town created by Atrumentis (his profile). It is a fan-made fictional town in the land of Sanctuary, though it should also be noted that Deeha'Blothri was created as a parallel universe of DiabloFans.com, which used to be known as Diablo3.com. It features characters who reflect notable members of the forums through actions and names.

Since the time of writing, the membership and staff have changed quite a bit at DiabloFans. Elfen Lied, mockery and Odijuar were in the past administrators, Cyks, Medievaldragon, Thasador and Stormcat have all been moderators, and many of them are some of the most active members in the past.

Deeha'Blothri is inhabited by many, and of them are the nobility and the enforcers. These are the main characters of Deeha'Blothri (In alphabetical order)

Also, it should be noted that a large warrior by the name of Stonebreaker likes to hang around the tavern.

Compared to the Forums

This section is a series of organized link lists to various episodes and volumes. Some links may be deprecated or dead- please fix these if you find any! Also, the links directly to original forum posts may or may not be accurate with the post count number of the post. They are there mostly for reference- the links should still go where appropriate. Again, if you find errors with any of those, please fix them.

The Lords of Satire

The Lord of Error

Diablo, the Lord of Error, leaves himself in ridiculous mistakes (Original link)

The Lord of Destraction

Baal, the Lord of Destraction, (distraction See, he distracted you with that spelling error) seems to sneak up to his victims and merely taunts them. (Original link) 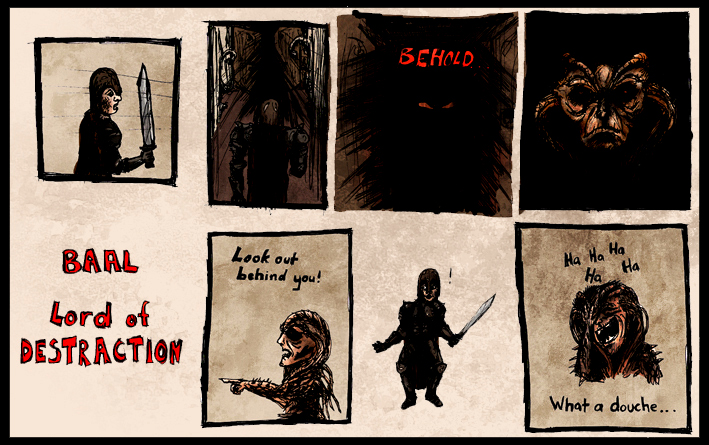 The Lord of Paint

Duriel, the Lord of Paint, infiltrates the fears of his victims and paints them. (Original link) 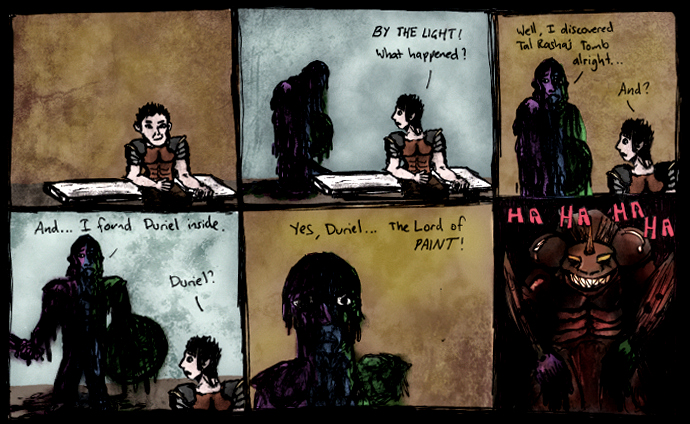 Thanks to Jetrall for the coloring!