Concentrate Barbarian by Kickin It

The Concentrate Barbarian is a uniquely defensive build, boasting some of the highest defense and life numbers of any character build. Thanks to this, the Concentrate Barb can survive nearly any onslaught. When properly geared, he can also dish out a fair amount of damage, making it a very solid all-around build. If there is one chink in the Concentrate Barbarian’s armor, it is the complete lack of any AoE skill. For this reason, it is not particularly well-suited to leveling (a Whirlwind or Frenzy build would be a better option), but should rather be respec’d to at a higher level. The sheer survivability of this build makes it a great option for hardcore play and provides a nice alternative to the cookie-cutter Smiter if you’re looking to do Ubers. 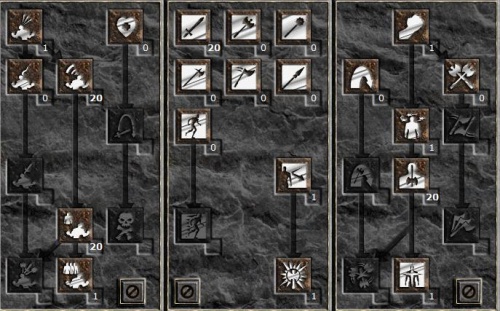 The base skills for this build will require level 76 to max, assuming you’ve completed all skill quests on all difficulties. After this, you’ll have an opportunity to pick up some optional skills or boost synergies (or both).

After your primary skills are all filled out, you’ll still have 23 points to spend. These can be used in a variety of ways, depending on personal preference:

This Concentrate Barbarian has nearly 21,000 defense, even when afflicted by Baal's defense-reducing curse.

A few notes on your primary skill: first, the armor bonus will only be applied when your attack succeeds. Missed or blocked attacks will not give you the armor bonus. The bonus lasts for a very short amount of time (less than a second), so it’s important to have a weapon that swings quickly enough to keep the buff active (more on this in the next section). Aside from the armor bonus, one of the primary benefits of Concentrate is the fact that it is uninterruptible, which significantly reduces the importance of Faster Hit Recovery for this build, making gear choices easier, and provides the Barbarian with a fighting chance, even when swarmed by enemies.

For the most part, an Act II Nightmare Offensive Mercenary will be your best bet, as his Might Aura will provide you with a nice damage boost. However, if you’re using a Last Wish, your Might Auras won’t stack, so you’d be better off with a Holy Freeze Merc (Nightmare Defensive).