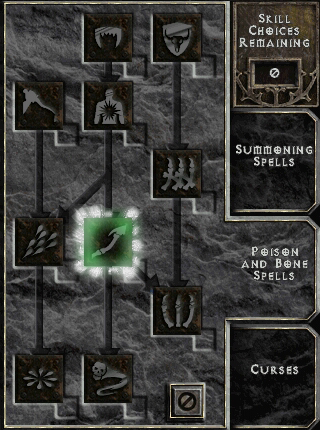 Bone Spear is the staple attack of the Bonemancer. It deals very good damage, and since it is entirely magic damage, it will encounter very few immunities in Hell, making the Bonemancer quite capable of soloing through the game.

While Bone Spear is initially not as powerful as Bone Spirit, it receives larger synergy bonuses, and with proper points invested into the Poison and Bone tree, Bone Spear becomes the deadlier spell. Even at lower levels, however, Bone Spear's piercing properties still make it a better option against packs of monsters, as it will deal damage to all enemies it passes through, whereas Bone Spirit is only capable of damaging one enemy at a time. Bone Spear also has a higher mana cost-to-damage ratio than Spirit, though this is likewise erased when damaging multiple enemies. Bone Spear's rate of travel is also significantly higher than Bone Spirit's, though it lacks the ability to home in on mobile enemies.

Also known as the Talon of Trang'Oul, this spell summons a long shaft of bone issuing forth from the caster and piercing any opponents in its path.[1]