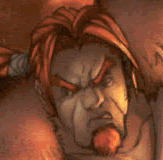 "I can never go back there again... I can never risk hurting anyone ever again."

Azgar is the main character in Rage, one of the three stories featured in Tales of Sanctuary. He is a Druid, with a bear as a spiritbeast. He is the son of Vane, warrior of the Tribe of Skeld.

When Azgar was a child, he trained with his father in the ways of the warrior. His brother, Grey, looked up to him and thought of him as his role-model. Grey's faith in his brother was so great that he had no doubt in the fact that Azgar would be the stronger than anyone. Azgar's father also had faith in his son.

As the trainee Druid grew up, his training expanded to include keeping the village safe from wild beasts and spiritual studies. During these studies, Azgar noticed that he was blessed with a spiritbeast. To better channel these abilities and control them, he started fortifying his spirit and mind through meditation. But one day, he inadvertently transformed into a Werebear.

"I became a monster!"

Never before had the young Druid known such rage. This frightened him, so he ran to the only place of comfort, home. Unfortunately, Grey was there. Azgar, being fully possessed by the beast, hit his little brother. Realizing what he had done, the young druid came back to normal. When his father came inside the house, he saw a bleeding Grey, in the arms of Azgar. Fearing that he had killed his brother, Azgar ran away in shame. The people of the village searched for Azgar, but he hid afraid to face the consequences of his actions. He felt that he could never go back to his home, not wanting anyone else to get hurt because of him. Not even when he found his brother to be alive, only blinded by the hit, did he consider going back.

Azgar became the protector of the the woods, keeping the forces of evil out of the forest, his new home, and away from the village, his old home, fighting undead and other forces of corruption.

Long after he left home, as Azgar was sitting in a snow-covered cave by a lit fire, a child came to him to ask for help. The kid told him that Baal's Minions of Destruction were amassing for an attack on the village. The Druid was hesitant at first and proceeded to tell the reason why he couldn't go back to help the villagers. But when the child said to him that only a few guards remained at the village, the bulk of the warriors being off on an offensive, he changed his mind. When the villages defenses were penetrated, Azgar intervened.

He fought valiantly, using both his sword and his Werebear form. When he had nearly destroyed the attacking Minions, he was mortally wounded by a monsters spike. As he lay dying, his brother came up to him and told him that he had never blamed Azgar for what had happened and that the villagers that had been looking for him had just wanted to bring him home. Grey, holding his brother as he give his last breath, said that Azgar would always remain his brother and his hero and that his brother's name would always be honored for saving his village.

Due to his years of training with his father and on his own, Azgar is an extraordinary fighter. He can use his fist, his sword and his Werebear form to defeat great scores of enemies. As a youth, during his training he killed wild animals, including bears, with only a short-sword. As an exile, he singlehandedly defeated an undead invasion of the forest, without transforming. His fight with the Minions of Destruction attacking the village, which proved to be fatal, shows that he has mastered the Werebear form, and that he can use it to reap destruction upon his enemies.