The Auction House was a new trading system introduced in Diablo III which shared many features with similar systems found in other games. Accessed through Battle.net and not from in-game, the auction house allowed all players within a region (US, EU etc.) to buy and sell items easily and conveniently between each other. Almost all items other than quest items could be sold between players, and everything was player-operated: Blizzard did not sell any items.

In addition to buying and selling items for in-game gold, the auction house used real money, be it dollars or other region-specific currency. 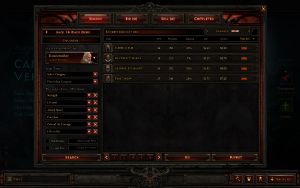 The auction house will list all currently available auctions in a given region (Diablo III will be region locked, so no trade between different regions). By specifying parameters such as what item type and what stats the player would like, the auction house will search through all auctions currently posted and return the most desirable results to the player who can then bid on them. All auctions will be completely anonymous, there will be no way for a player to know who put up an auction.

Since auctions are handled through the Battle.net interface and not through the game client, a player can concurrently access all items across all characters when using the AH. Similarly, once an item is bought, it is sent to a player's shared stash, and can be used by any character (provided they meet the item requirements).

Diablo III had two separate Auction Houses. One uses Gold earned in-game while the second uses real-world currency. Sales and purchases from the Real Money Auction House (RMAH) can be funded by either the players Battle.net account balance or a separate e-commerce service such as Paypal.

In case something goes wrong, like the buyer not having any money yet still getting the item, Blizzard will fully reimburse the player. All transactions will be guaranteed by Blizzard so there is no way to get scammed in this system. 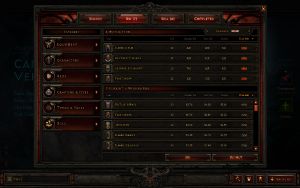 In order to buy items, all the player has to do is transfer over money to their B.net account, which will convert it into e-balance. A player can then go bid on items with that e-balance. If the auction is won, the bid is automatically subtracted from the player's e-balance and the item is delivered instantly. If a bid is placed on an item but someone else outbids it, it will cost the player nothing. This is true for both the gold and cash auction house systems, the only difference between them is that one will use actual money.

Selling items is a little more complicated. If a player wants to put up an item for sale, a listing fee has to be paid to Blizzard. This fee will be subtracted whether the auction is successfully sold or not. In the gold AH, this fee is a gold sum (similar to how the World of Warcraft auction house works), and in the cash auction house it's an e-balance amount. This fee is set at a fixed nominal value (the exact amount has not been revealed at this time). If auction isn't sold, it will remain in the player's stash, but the fee will already have been extracted. If the auction is sold however, there is also a small selling fee applied, either gold or e-balance depending on what auction house is used. This fee is also paid to Blizzard. Both of these fees are undetermined at this time, but have been stated to be small. In addition, if a sale does go through, two things can happen.

By default, money that people buy items for will be added to the sellers e-balance or gold amount. However, it will also be possible to set up a Battle.net account so that incoming cash will be added a player's credit card. This will require adding a third party payment service to the account to handle the actual transaction. Blizzard is currently negotiating with potential companies at this point in regards to who will handle this service, so at this point we don't know who it will be or in what regions they will operate. However, it will be possible to make money selling items in Diablo III. What will not be possible, however, is to convert e-balance back into cash. So if a player sell an item and haven't set up their account to give them cash, it will increase their e-balance instead. That e-balance cannot later be withdrawn as cash, but it can be used to buy other items and anything in the Blizzard store, including games and World of Warcraft subscription time.

Blizzard has also stated that every player gets a number of auctions which allows them to put up cash auctions without paying the nominal fee. It's unclear whether this is a fixed amount for each account (x free auctions in a lifetime), a fixed amount concurrently (x free auctions at any one time) or a recharging value (x free auctions every week). In any case, using such a free waiver will give you the possibility of making money without risking a single cent. If an item is sold however, the selling fee will still be applied.